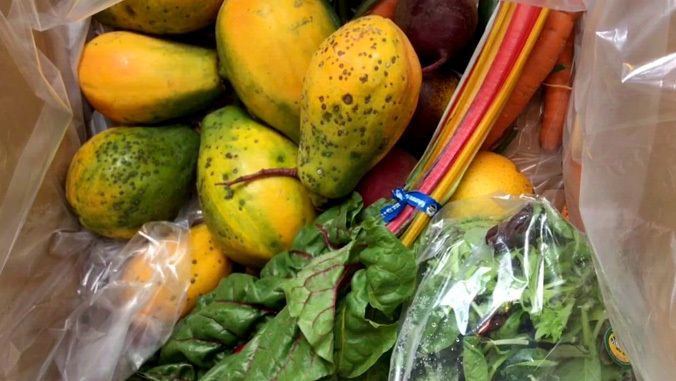 Demand for local produce has grown substantially during the COVID-19 pandemic, according to University of Hawaiʻi at Mānoa College of Tropical Agriculture and Human Resources Department of Tropical Plant and Soil Sciences Professor Noa Kekuewa Lincoln. Uneasy about virus transmission, many consumers want to minimize trips to the store and are opting to have produce boxes from local farms delivered directly to their doorstep.

That process was spearheaded through food hubs (distributors who help connect local farmers and consumers) who collectively experienced a three-fold increase in sales. According to Lincoln, it’s a welcomed consumer shift that he hopes will lead to stronger support for food sustainability in Hawaiʻi.

“Food Hubs play an absolutely critical role of dealing with and aggregating small farmers into meaningful levels of production, consistency and quality control. This is essential if we want our 7,000+ small farms to actually feed into our food system, instead of just having them live on the margins through farmer’s markets and direct sales,” he added.

On November 9, Lincoln will share equitable food systems strategies at a UH-sponsored virtual conference focused on economic recovery as a result of the pandemic. “Innovations for the New Normal” is a free four-day conference presented by the UH Office of the Vice President for Research and Innovation that will highlight efforts in vital areas such as resilient food systems, health care, and digital infrastructure to help promote economic diversification and stability.

In September 2020, Lincoln released a book, Kō: An Ethnobotanical Guide to Hawaiian Sugarcane Cultivars. It revealed more than 100 varieties of native and heirloom kō and uses for food, medicine and cultural practices. His expertise lies in indigenous crops and traditional farming methods. A majority of farming systems around the world, including Hawaiʻi, are set up using the European agriculture model or monocrop which is repeatedly growing a single crop on the same land. According to Lincoln, that form of farming is one way to get the most food out of the labor inputs but he’s on a mission to revive the agricultural system practiced by ancient Hawaiians for centuries that is more efficient and environmentally friendly due to a reduction in water usage, more nutrient-rich soil and lower susceptibility to erosion.

Proof is in the lepo (dirt)

Effectively managing less than ideal soil was a key component in the success of Hawaiian agriculture. Lincoln proved that about a decade ago when he helped restore an ancient ʻuala (sweet potato) system in leeward Kohala. Despite the abundance of poor soil, the parcel is highly productive.

These days his hands are busy bringing an ancient ʻulu (breadfruit) forest, Mala kaluʻulu to life. After sifting through old maps and newspapers, he learned the region was once known as the “breadfruit belt.” According to Lincoln, in ancient Hawaiʻi, ʻulu was not as widely consumed by Hawaiians as it was in other parts of Polynesia. He believes the potato-like fruit may have been used to feed pigs which could be bartered by aliʻi (chiefs) of the day during political negotiations. Inspired by his findings, Lincoln discovered the four-acre parcel in Kona where he and a team began to restore the traditional breadfruit agroforestry. Restoration is expected to be complete in a few more years and will be used for a research program. For Lincoln, the project is a prime example of what feeds his passion.

“Any hard work on the ʻāina always makes me feel good. Connected. Grounded. I feel closer and in better communication with our ancestors and the planet when doing what most every human and animal has done since time immemorial—interact with our environment to feed ourselves,” he said.