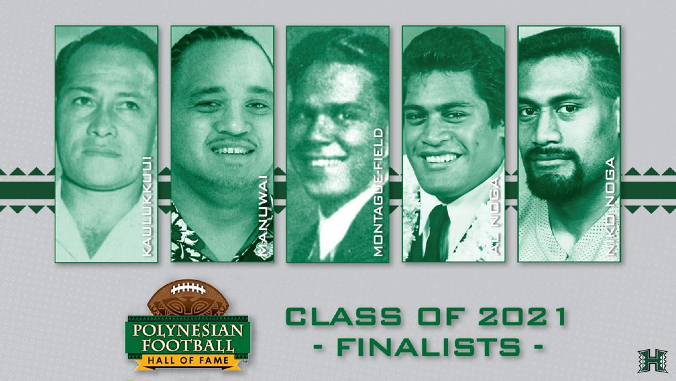 Finalists for this year’s Polynesian Football Hall of Fame include five former University of Hawaiʻi at Mānoa players.

On the ballot for induction into the Class of 2021, are standouts Alapati “Al” Noga and Falaniko “Niko” Noga. Also in the running are former player and coach Tommy Kaulukukui, and former players Vince Manuwai and Harry Montague-Field.

Al and Niko Noga were inducted jointly into UH’s Sports Circle of Honor in the Class of 2013. Niko was a four-time all-Western Athletic Conference selection and two-time honorable mention Associated Press All-American. Al was UH’s first AP first-team All-American and Heisman Trophy candidate in 1986. This is the Nogas’ fifth consecutive year as finalists for the Polynesian Football Hall of Fame.

Kaulukukui was the first ever UH athlete to earn All-America recognition as a football player in the 1930s. His 103-yard kickoff return against UCLA in 1935 is still a school record. In six seasons as head coach, Kaulukukui led UH to a 34-18-3 record.

Manuwai was a first-team All-American by CNN/SI and CBS Sports in 2002. Following his UH career, he was picked in the third round of the 2003 NFL Draft and started 105 of 111 games with the Jacksonville Jaguars. Manuwai died in 2018 at the age of 38.

Montague-Field was one of the state’s great athletes in the late 1920s and early ’30s. He spent one season with UH in 1930 before transferring to Oregon State.