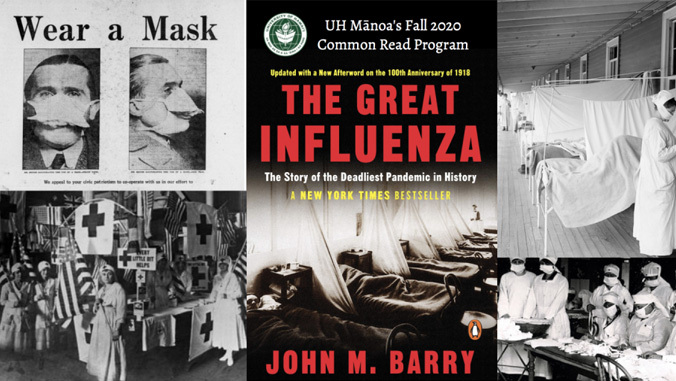 A virtual discussion with award-winning author, presidential advisor and professor John Barry on November 12, gave an audience of nearly 200 throughout the University of Hawaiʻi at Mānoa campus insight into the parallels between the 1918 influenza pandemic and the present COVID-19 crisis. Barry answered questions that covered everything from similarities and differences, his experience advising past presidents, thoughts on how COVID-19 will affect us in the future, and practical advice for college students.

The talk was inspired by his best-selling book, The Great Influenza: The Story of the Deadliest Pandemic in History (2004), and is part of the First-Year Programs Common Read.

“My colleagues and I are grateful that we were able to have John Barry take part in the Common Read Lecture Series and bring even more context to The Great Influenza and COVID-19 for our students, as well as the campus community,” said Kyle Van Duser, director of UH Mānoaʻs First Year Programs.

“People can handle the truth, but you need to tell it to them,” Barry said in sharing the importance of being candid in messaging from public leaders and the news media, noting it was the biggest mistake in both the 1918 flu and COVID-19. When the 1918 flu outbreak occurred, World War I was nearing its end. However, news media and government leaders suppressed the truth of the flu to avoid affecting public morale. Similarly, he said, the Trump administration downplayed COVID-19 when they learned of the virus in late January 2020.

“The result was people were exposed who otherwise would have survived. Many cities ended up doing many of the things we are doing now. If done sooner, it would have saved more lives,” he said. Barry mentioned cities that were hit hardest in 1918 were where people were lied to the most (i.e. Philadelphia). “Society is based on trust. When you break that trust, it’s everybody for himself/herself or their family.”

He added, “the major difference in 1918 and now, is from day one, people knew this was not a hoax. It was apparent the virus was very deadly. COVID is a big deal, but not as big as where we were in 1918.”

Barry revealed the 1918 flu killed people who were much younger (about 95%), and affected people neurologically (deep fog state) and attacked the lungs. “The immune system has a lot of very deadly weapons. In 1918, the battlefield was the lung. It was destroying the lung to beat the virus. People died of bacterial influenza,” he said.

He stressed the importance of mask wearing, saying “Just wearing masks alone by itself will not solve the problem, but is an important piece to solve the problem.” Interestingly, he said masks were not as effective in 1918 because the period of transmission of the virus was different.

Barry also compared the relentless pressure in COVID-19, which is adding more stress on society and the economy. He stated while there was more tragedy and deaths from the 1918 flu, it experienced a shorter incubation of 1 to 4 days, where COVID-19’s incubation is stretched out to several weeks, impacting mental health and resulting in issues such as domestic violence and suicide.

Barry described his experience working with the President George W. Bush and Barack Obama administrations as “intellectually challenging and flattering.”

Bush, who read Barry’s book, made it a high priority for his administration to create a pandemic plan. Barry was involved in the process. He also served as a backchannel communicator to the Obama administration, providing the White House with data from censored scientists around the world.

His advice to President-elect Joe Biden? “Take the advice of public health advisors and get everyone on one page. It’s easier said than done, especially with governors reluctant to do anything. It’s a long grueling fight and you have to maintain discipline every day, or it will come back,” said Barry.

The Great Influenza took Barry seven years to write when he intended to complete it in two years. His advice to college students (and aspiring writers) was simple: “Love what you’re getting into. When things aren’t working, you have to figure out, is this something you want to walk away from or is it something you can solve if you persist?”

View Barryʻs lecture and other presenters part of the Common Read Lecture Series. Free paperback copies of The Great Influenza are available on a first come first serve basis at Sinclair Library to anyone in the UH community interested in reading the book.

The First-Year Programs Common Read advisory reading group is currently accepting book nominations from all UH Mānoa faculty, staff and students (graduate and undergraduate) for the fall 2021 Common Read. Submit book nominations by January 5, 2021. If you would like to integrate future common reads into your course, contact reading@hawaii.edu to participate in the book selection process.

“The eagerness of my colleagues from across academic disciplines who participated in this project speaks volumes about the collaborative nature of faculty at UH Mānoa and enhances the exchange of ideas and knowledge, which is what the First Year Programs Common Read seeks to do,” said Van Duser.