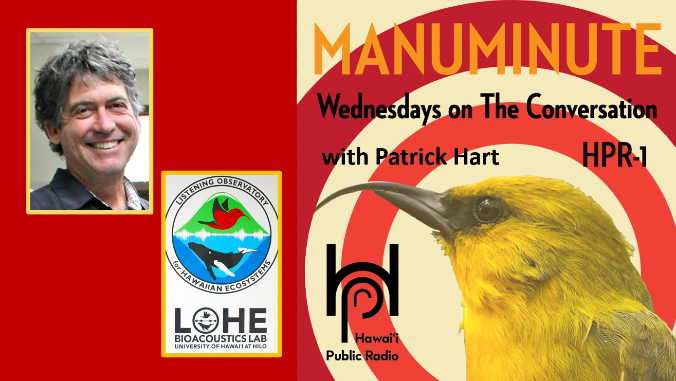 Native Hawaiian birds are the focus of a University of Hawaiʻi at Hilo biology professor’s radio series, which debuted on October 17 on Hawaiʻi Public Radio (HPR).

Patrick Hart specializes in the conservation of Hawaiian forests and forest birds and has teamed up with the radio station to produce an ongoing series called Manu Minute featuring a different native bird each week.

“[The series] will run during The Conversation on HPR every Wednesday,” said Hart. “We will focus on a different bird each week, leading with the bird’s song, then me talking about the natural history and conservation of the bird, and ending with its song again, all in one minute.”

In the new Manu Minute radio series, the audio of each bird song is made from field recordings conducted by Hart’s Listening Observatory for Hawaiian Ecosystems (LOHE) Lab. Each segment also includes a descriptive article about the species, photos of the bird, and an image of the spectrogram of the bird’s song showing the details of the unique sound of each bird.

Hart’s Manu Minute featuring the ʻamakihi, a species “among the last native non-shore birds that can be found near sea level,” is in the top 10 most popular posts on HPR for the year.