University of Hawaiʻi at Mānoa undergraduate research and creative works were on display at the 2020 Fall Undergraduate Showcase on December 11. Nearly 40 students working on 25 projects presented their work virtually.

The showcase, hosted by the Honors Program and the Undergraduate Research Opportunities Program (UROP), is held every semester and is open to UH Mānoa undergraduate students in all fields of study conducting a research project or creative work.

“The showcase demonstrates the high caliber of the work our undergraduates are capable of,” Honors Program Director Vernadette Gonzalez said. “It is always inspiring to see how students across the disciplines take ownership of their education, and work with dedicated faculty to produce original creative and research projects that are signature experiences of their time at UH Mānoa.”

This year’s projects ranged in topics such as arts and humanities, technology, marine, plants and medicine. The showcase was presented virtually due to COVID-19 restrictions.

“The Fall 2020 Undergraduate Showcase event is yet another great example of how the undergraduate students on our campus are continuing to engage in faculty mentored research and creative work despite the immense difficulties imposed by the pandemic,” UROP Director Creighton Litton said. “The commitment and capacity of these students and their faculty mentors to confront significant challenges is truly remarkable.”

The UH Drone Technologies (UHDT) team presented one of the projects in this year’s showcase. The project aimed to increase the efficiency of search-and-rescue missions using autonomous waypoint navigation, target localization, image capture and classification, as well as to increase the success of package delivery for unmanned aerial systems. UHDT utilizes three subsystems for the project: unmanned aerial vehicle, unmanned ground vehicle and image processing.

“Oftentimes we would test electronics individually and everything would work, but when we put them together we find a bunch of problems so we spend the time troubleshooting different things,” Hihara said.

Directing a film from a cultural perspective 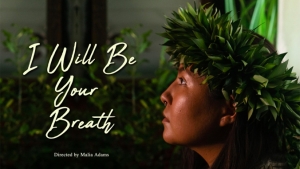 Academy for Creative Media (ACM) students Malia Adams and Mahina Smith created a short film about a young Hawaiian woman who learns about what her great-grandmother experienced in the early 1900s. I Will Be Your Breath is based on Adams’ family and came to life as she listened to her family’s cassette recordings. Adams recalled learning about the history that her grand-aunties shared about their mother, but all her history was shadowed by the history of Hawaiian colonization.

“The one thing that really stayed with me while listening to the tapes, was the fact that my great-grandmother learned Hawaiian on her own, and I took that as another way of resistance in a period of time where all that they wanted was to erase us,” Adams said. “With this short film I want to let everyone know that thanks to those who were before us, we are still here today, and that we will not be erased.”

Electrical engineering student Christopher Aguilar created a custom solar water heater that he hopes will eventually improve the efficiency of solar water heaters in Hawaiʻi. The system includes a flat plate solar collector, heat exchanger and water tank. Aguilar’s design is different from other commercial solar water heaters because it can collect and process data to help him determine the changes needed to improve its efficiency.

Evaluations indicated that during periods of low solar irradiance, heat losses were appreciable when using a flat plate solar collector. In future experiments, Aguilar hopes to introduce nanoparticles into the system to raise thermal conductivity, and ultimately, its efficiency. He said this introduction shows promise given that Hawaiʻi’s air temperature generally stays consistent year-round.