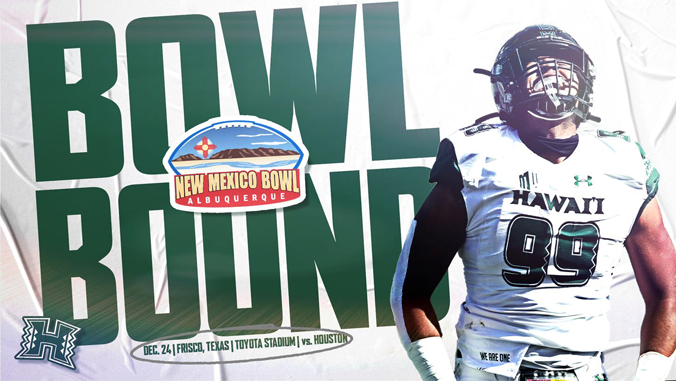 Due to current New Mexico state regulations, the game will be played in Frisco, Texas this year. It is scheduled for Thursday, December 24, and will be televised nationally on ESPN. Kick-off is 10:30 a.m. HST at Toyota Stadium.

The Rainbow Warriors will make just their third-ever trip to a mainland bowl and first since the 2008 Sugar Bowl. The team earned its fourth win with a victory over Nevada on Saturday.

After the invite, UH made the announcement of the bowl game on Twitter with a comical reprise of the holiday movie Elf.

This is not the first time Hawaiʻi faced Houston in a bowl game. The Warriors outlasted the Cougars 54-48 in triple-overtime in the 2003 Hawaiʻi Bowl.

“We’re extremely happy for student-athletes, coaches and staff for this special and rare opportunity for a mainland bowl game,” UH Athletics Director David Matlin said. “We’d like to thank ESPN for helping to make this happen, as well as Hawaiian Airlines for once again stepping up with transporting our team. They’ve been absolutely vital for us all season.”

The Rainbow Warriors have earned a bowl bid in four of the last five years, including each of the last three seasons.

It is UH‘s first bowl game under head coach Todd Graham who took over the reins of the Warriors this past January.

“I am so excited for our team and staff,” Graham said. “They’ve worked hard throughout this entire season, under such challenging circumstances. This game is a great chance to showcase our team to the people of Texas and to a national television audience. Houston is a fine program and we can’t wait to compete against them on Christmas Eve. Go ‘Bows!”

Graham will coach in his 10th bowl game in his 13th season as an FBS head coach. He has directed all five of his programs to bowl appearances and holds a 5-4 bowl record.

Read more about the match up at HawaiiAthletics.com.