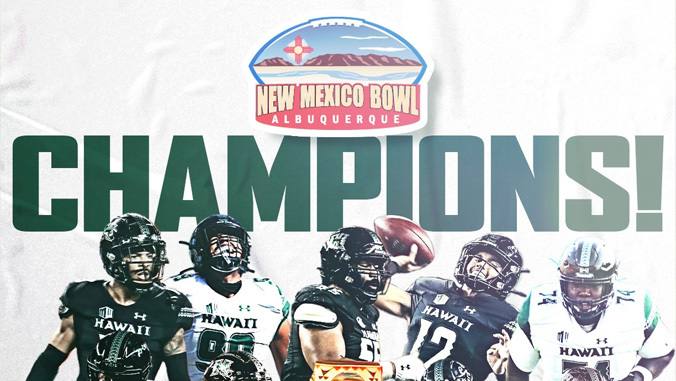 The University of Hawaiʻi football team delivered a Christmas gift to its fans with a 28-14 win over the Houston Cougars in the New Mexico Bowl on Christmas Eve. The victory capped off a 5-4 campaign in 2020 under Todd Graham in his first season at the helm of the program.

The Rainbow Warriors shone on both sides of the ball with senior wide receiver Calvin Turner leading the offense with 88 receiving yards, 60 rushing yards, one receiving touchdown and a 92-yard kickoff return for a touchdown. Sophomore quarterback Chevan Cordeiro controlled the passing game going 15-for-23 for 136 yards and three touchdowns.

On the defensive side, interceptions in the first quarter by junior linebacker Penei Pavihi and freshman defensive back Michael Washington led to touchdowns by the offense. Junior defensive back Khoury Bethley led the team with 14 tackles, and All-Mountain West first team member sophomore linebacker Darius Muasau added nine tackles and one interception.

This year’s New Mexico Bowl was played at Toyota Stadium in Frisco, Texas due to New Mexico COVID-19 state regulations.

The Rainbow Warriors jumped in front early with two touchdown passes by Cordeiro to freshman running back Dae Dae Hunter and a game-high 75-yarder to Turner. A 52-yard dash by Cordeiro and a four-yard touchdown pass from Cordeiro to sophomore defensive lineman/tight end Jonah Laulu capped off a dominating 21-0 first half for UH.

Houston came out firing with two consecutive touchdown-scoring drives to open the second half. However, the Cougars’ momentum was quickly halted after Turner’s kickoff return for a touchdown near the end of the third quarter pushed the Rainbow Warriors in front 28-14. Both teams were able to move the ball down the field but could not muster up a score.

It was the second meeting between the pair of UHs. The Rainbow Warriors outlasted the Cougars 54-48 in triple-overtime in the 2003 Hawaiʻi Bowl.