Ten University of Hawaiʻi Marching Band students will take the national spotlight during the 2021 College Football Playoff National Championship game on January 11. They will be among 1,500 students from 200 bands across the nation performing virtually in the halftime show. This is a silver lining for the students after the UH Marching Band was sidelined this season due to COVID-19.

“It’s extremely cool that I’m part of something as big and memorable as this,” said drum major Casandra Ancheta. “This isn’t something that would normally happen during the season and being able to rep UH during this is such a huge blessing. It’s a tough time right now for marching bands, and musicians in general, but knowing that there are still ways we can make music is really important for me and I’m sure for everyone else as well.”

The group will perform Beyoncé’s “End of Time.” The choreographed halftime show by the College Band Directors National Association, GPG Music and Our Virtual Ensemble, was created since many marching bands nationwide have been unable to rehearse and perform due to the pandemic. It will feature musicians, color guards, baton twirlers, majorettes and dancers. Fernando Pacheco, the “Voice of the Rainbow Warrior Marching Band,” was also selected as one of the halftime announcers.

“The pandemic impacted many marching band organizations and this project allowed us to make music with other college band members,” said trombone/euphonium section leader Joey Nakamoto. “Without the pandemic, this opportunity would not have been available.” 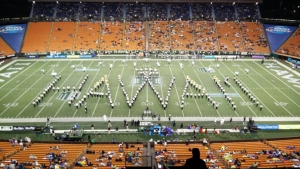 Despite not having full in-person rehearsals and performances, Ancheta, one of three drum majors, said she is proud of the band’s approximately 250 members.

“The band really stuck through this semester and still came to virtual rehearsals with a positive attitude every day,” Ancheta said. “For me, that’s what mattered the most because it showed that they really cared about the band and most importantly about each other.”

For more on the UH Bands, visit their website.