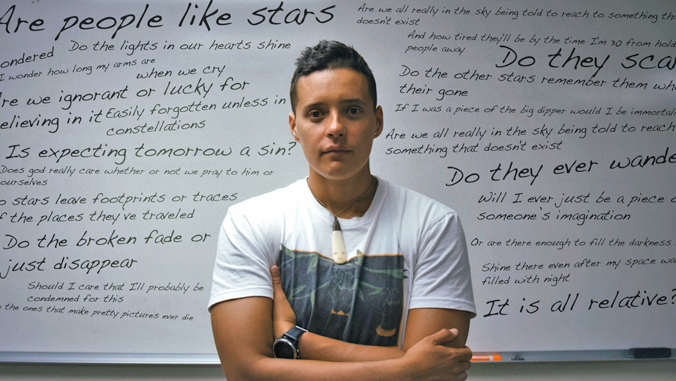 A University of Hawaiʻi at Mānoa professor’s quest to use slam poetry as an art to protect sacred sites on Maunakea will be showcased in front of a worldwide audience. One of the most prestigious international film festivals, the 2021 Sundance Film Festival, will feature Department of Political Science Assistant Professor Jamaica Heolimeleikalani Osorio in This is the Way We Rise, January 28–February 3.

Due to the COVID-19 pandemic, the festival is virtual. The film will be available on-demand throughout the festival and it is part of the short films program. To purchase tickets, visit the Sundance Film Festival website.

“I’m ecstatic that Sundance decided to pick up the film, not just because Ciara and the whole team did a beautiful job at telling the story, but because the issue at the center of this moʻolelo (story), the issue of Maunakea and the Thirty Meter Telescope, is not only a Hawaiʻi issue, but an international issue,” Osorio said.

The film highlights the creative process—writing poetry, or performing music—and how it is integral to Osorio’s work as kiaʻi or a protector of the mauna and as a people who love and care for Hawaiʻi. Osorio said viewers who are not familiar with the issues should anticipate an eye-opening film.

“I’m hopeful the film helps us to continue to build bridges with other Indigenous people around the world and of course, other people of color who are struggling for freedom and liberation,” Osorio said. “The film can be a place where we gather and tell our stories and show the way we are connected.”

The film is directed by Ciara Lacy and will mark the first time a Native Hawaiian woman has directed a film showing at Sundance. Lacy originally reached out to Osorio to frame the piece about a young artist of color and their creative process. However, the issue atop Maunakea caused the film to take a new meaning.

“I actually called Ciara two days before we were supposed to start filming and I said, ‘hey, we have to actually pause this film. I need to go to the Big Island.’ And then instead of her saying, ‘ok, we’ll reschedule,’ she said, ‘ok, I’ll see you up there in two days,’” Osorio said. “That changed the whole story that we were going to tell.”