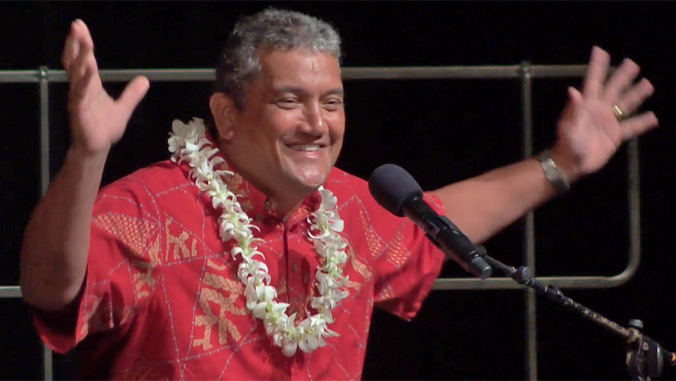 Kenoi started his post-secondary education at Hawaiʻi Community College and the University of Hawaiʻi at Hilo before transferring to the University of Massachusetts at Amherst. He later earned a law degree from UH Mānoa’s William S. Richardson School of Law.

He went on to become a public defender in Hawaiʻi courts and moved into politics, becoming Hawaiʻi County mayor at age 39. Kenoi also worked as a lecturer at Hawaiʻi CC 2004–09 and again 2017–18.

“On behalf of the entire UH Hilo community, I extend my deepest condolences to Billy Kenoi’s ʻohana, colleagues and friends,” UH Hilo Chancellor Bonnie Irwin said. “Our island is mourning the loss of an exemplar of community servant leadership, and our university mourns the passing of a friend and supporter.”

“My condolences go out to Billy’s wife and children and the rest of his family and friends,” UH President David Lassner said. “It was truly a joy whenever I could spend time with him. Billy was a strong supporter of our university and took great pride in being a UH alum. His generosity of spirit, gracious local manner, passion for our community, love of Hawaiʻi and of course his humor will be deeply missed.”

“My deepest condolences go out to Billy Kenoi’s ʻohana,,” said Hawaiʻi Community College Chancellor Rachel Solemsaas. “Billy believed deeply in the power of education to transform lives, and we were honored to have him as an instructor and member of our Kauhale. He was a great supporter of our students and the unique mission of community colleges, and he spread the message far and wide that anyone who has a dream, believes in themselves, and puts in the work can achieve great things. That’s a powerful legacy to leave behind.”

Kenoi was well-known for his powerful speeches that were full of passion, humor and pidgin English.

He addressed UH Hilo’s College of Pharmacy Class of 2012 at their White Coat Ceremony stating: “Never ever doubt yourself, you got here already. All you got to do is keep doing what you did to get you here in the first place. You already know how to succeed. That’s why you are here.”

Kenoi is survived by his wife, Takako, and their three children. Memorial services are pending.