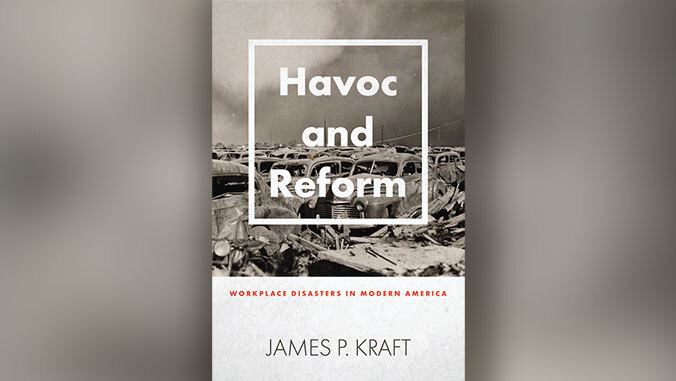 Workplace disasters are the focus of a new book by a University of Hawaiʻi at Mānoa professor. Department of History Professor James P. Kraft, a specialist in U.S. history, spent several years researching modern tragedies that had implications for American industry and society. His new book, Havoc and Reform: Workplace Disasters in Modern America, explores large-scale catastrophes such as the destruction of a Texas chemical plant in 1947, the deadly 1980 fire at the Las Vegas MGM Grand Hotel and the 1995 bombing of the Oklahoma City Federal Building.

Kraft concentrates on disasters that occurred in the greater American Southwest after World War II, a region and period not often associated with his subject matter. These tragedies caused widespread death and dislocation, as well as the loss of property and savings, but they also inspired safety reforms that reshaped labor conditions. After the MGM Grand fire, for example, Nevada passed new fire safety laws that required automatic sprinkler systems in all high-rise structures.

“These reforms did not come easily,” Kraft emphasized. “They required coordination and interaction between countless numbers of individuals, groups and organizations.”

Making workplaces safer is a never-ending process. “Time after time, history has shown that safety reforms only mitigated rather than prevented disasters altogether,” Kraft said. “Safety rules and regulations have to be monitored and maintained, not just now and then, but always and forever.”

Kraft found inspiration for this work while finishing his previous book on labor conflict in the Las Vegas resort industry.

“While working on my previous project, I came across several graphic images of the MGM fire. At that point, I began to see traditional narratives of workplace disasters as fragmented and incomplete,” he explained.

This book has implications for Hawaiʻi and its tourist-based economy. Kraft warned, “Service-oriented economies are not immune to workplace calamities. Unlike disasters in areas of manufacturing and mining, disasters in the transportation and service sectors kill and injure customers as well as employees, sometimes by ratios of more than 10 to one.” This book shows that communities need to stay abreast of new safety practices and technologies.

Havoc and Reform: Workplace Disasters in Modern America will be released on March 2. You can preorder the book through Johns Hopkins University Press. This is the third book Kraft has published with Johns Hopkins. The first was Stage to Studio: Musicians and the Sound Revolution, 1890–1950, and the second was Vegas at Odds: Labor Conflict in a Leisure Economy, 1960–1985.