Born in Hau Giang Province in southern Vietnam in 1989, Thu Nguyen spent her early years without the comforts of modern life, working hard to make money for her family and being made fun of in school for being poor.

When she was 16, a friend convinced her to visit an internet cafe, where she used a computer for the first time. She met a young boy online named Thanh, who had immigrated with his family to Hawaiʻi from Vietnam. After an online courtship that lasted for a few years, they eventually married in 2013 and Nguyen came to Hawaiʻi to begin a new life.

Part of this new life included her dream of becoming a nurse, but being in a new place meant that everything was different: the environment, the food and the language. To make a living, she worked at a local nail salon, while her husband worked as an independent contractor to support their two sons. 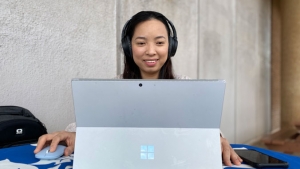 Nguyen needed to learn English in order to pursue her dream career so she enrolled at Leeward Community College in August of 2020, despite hardships caused by the coronavirus.

“I won’t give up now. The challenges I face now are nothing compared to what I faced before,” she said.

With English classes that met online four days a week, Nguyen said it was convenient for her to support her older son with his online learning in the mornings and then join her English classes online in the afternoons, while her younger son took his nap. Occasionally she would stay up until 3 a.m. doing homework, which she had little time for on the weekends due to her part-time job at the salon.

Nguyen excelled in her online English classes, where she was a friend to every classmate. She gave support and encouragement when she saw her classmates struggling with online learning, and she knew to ask for help when she needed it.

According to her English instructor, Kelly Kennedy, “One of the many things that makes Thu a strong student is that she asks questions, and she really takes the time to understand. She doesn’t rush. She has the perseverance to keep going. That makes a big difference.”

Despite the pressures Nguyen has felt due to the pandemic and the challenges of online learning, she has a positive outlook. She speaks fondly of her son’s kindergarten teacher, who has helped him learn to do things for himself. She is grateful that she and Thanh have continued to find work and that her family has been healthy. She is also grateful for the opportunity to study at Leeward CC and pursue her dream of becoming a nurse.

Her advice to fellow students is, “Be patient. Don’t give up. How fast you walk is not important. Keep walking.”

—By Kelly Kennedy, English as a second language instructor