A symposium brought together some of the nation’s foremost academics in the areas of critical race theory, family law, health and reproductive rights, food law and policy, and feminist theory, to discuss a University of Hawaiʻi at Mānoa William S. Richardson School of Law professor’s book highlighting breastfeeding, race and injustice.

Professor Andrea Freeman’s Skimmed: Breastfeeding, Race and Injustice has gained wide acclaim, and she has been a sought-after speaker at seminars and forums nationally and internationally. 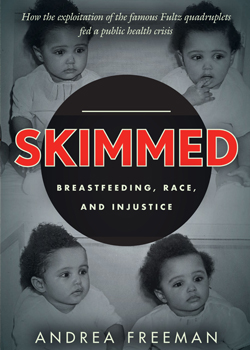 The symposium was hosted by California Western School of Law President and Dean Sean Scott on March 12 via Zoom. Scott introduced Freeman who gave a keynote address followed by comments from a panel.

“The work and insights of the wide range of scholars who participated in the symposium surfaced new and important issues related to food oppression that will inspire innovative thinking and social reform,” said Freeman.

In her book, Freeman traces the story of the famed “Fultz Quads”—four identical sisters born into a North Carolina tenant farming family in 1946. They were America’s first surviving Black identical quadruplets. Their white physician sold the rights to use the girls for marketing purposes to the highest-bidding formula company, Pet Milk. Now, three-quarters of a century later, baby formula is a $70 billion industry and Black mothers have the lowest breastfeeding rates in the U.S.

UH law Dean Camille Nelson praised Freeman’s book for its exploration of how cooperation between government and the food, agricultural and pharmaceutical industries can lead to race, gender and class health disparities.

“It is not often that an entire symposium is devoted to the research and scholarship of a faculty member,” said Nelson. “We celebrate this well-deserved recognition of Professor Freeman’s compelling scholarship. It is illuminating work that is far-reaching in its impact.”