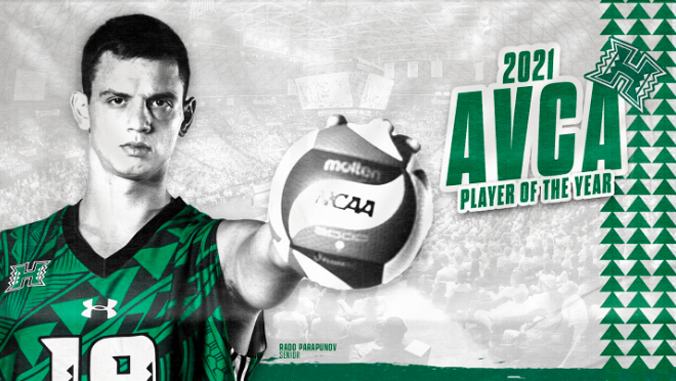 University of Hawaiʻi at Mānoa men’s volleyball opposite Rado Parapunov is the 2021 American Volleyball Coaches Association (AVCA) Player of the Year (POTY). The senior from Bulgaria joins Yuval Katz (co-POTY in 1996) and Costas Theocharidis (2001 and 2003) as the only players in the program’s history to win AVCA Player of the Year honors.

Parapunov ranks No. 3 nationally in kills per set (4.41) and points per set (5.24). He is averaging a career-best 1.56 digs per set, 0.90 blocking average and .340 hitting percentage. Parapunov also leads the team with 19 service aces and cracked the program’s top 10 in career kills and aces earlier this season.

In 2021, he earned his third first team All-American honor, second Big West Player of the Year award and third all-Big West first team selection. Parapunov also won Off the Block’s Nicolas Szerszen Award for the third consecutive year and the Bryan Ivie Award for the second time. The Szerszen Award recognizes the nation’s best non-U.S.-born player and the Ivie Award is presented to the nation’s best opposite.

Parapunov and No. 1 seed UH will face UC Santa Barbara in the national semifinals in Columbus, Ohio on Thursday, May 6 at 11 a.m. HST. If the Rainbow Warriors win, they will face the winner of the other semifinal between No. 2 BYU and Lewis on Saturday, May 8 at 2 p.m. HST for a national championship.

For more on the other Rainbow Warrior All-American selections, see this UH News story.