While the University of Hawaiʻi at Mānoa campus was temporarily closed due to the COVID-19 pandemic, facilities teams took advantage of the empty campus and got a head start resurfacing roadways. In the last half of April, more than 9,000-square yards (roughly one and half football fields) of pavement were resurfaced near the Administrative Services Building, back of Hemenway Hall and Campus Road from Varney Circle to Maile Way.

The total 27,545 square yards (roughly 4.3 football fields) of resurfacing was originally projected to be finished by summer 2022 or later, but due to the lack of traffic, the project is now expected to be completed by fall 2021.

“It’s much easier with an empty campus because we can shut down the entire roadway and the work can be done all at once instead of piecemeal, which is what normally happens when we do the work during the school year.” said Blake Araki, director of campus operations and facilities.

The next areas scheduled for repaving are the Magoon Research Station and Animal Care facility, Legacy Path and Krauss Hall, Kamakakūokalani Center for Hawaiian Studies entry driveway and the area near the Korean Studies and Agricultural Science buildings.

Many units have used the significant decrease in traffic, foot and vehicle, as an opportunity to get ahead on a variety of facilities projects to maintain and improve the Mānoa campus in anticipation of classes returning.

See more resurfacing before and after photos. 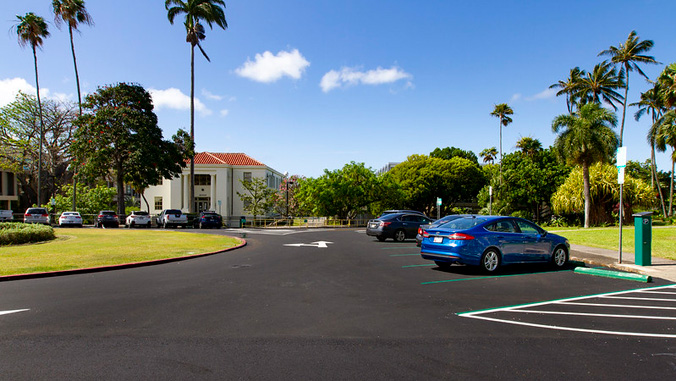