Making waves in the fight against disease at the University of Hawaiʻi is the Institute for Biogenesis Research’s (IBR) youngest full-time faculty member, 36-year-old Jesse Owens. Owens, who also earned his PhD in cell and molecular biology from UH Mānoa, was awarded $2.3 million from the National Institutes of Health (NIH) over the next five years to develop a new, safer and more efficient approach to gene therapy. He leads a team of collaborators from UH Mānoa’s John A. Burns School of Medicine (JABSOM), MIT and UC Davis. 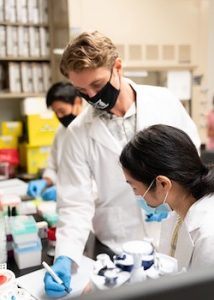 The $2.3 million grant is significant because it was a first-time submission and received a score in the 1st percentile, higher than 99% of grants submitted from institutions across all 50 states in the U.S.

“Directed evolution of a sequence-specific targeting technology for therapeutic gene delivery to the human genome,” Owens’ grant addresses drawbacks to current genome editing technologies that randomly insert a therapeutic gene, which can disrupt important host genes and potentially cause cancer. Methods like CRISPR (clustered regularly interspaced short palindromic repeats), a family of DNA sequences in genomes of organisms, are inefficient in non-dividing cells and delivering large DNA cargos. However, the technology that Owens is developing can direct large pieces of DNA to a safe location in the genome that can be used in all body tissues, both dividing and non-dividing, “which will allow us to cure more types of diseases.”

“This is an R01, which is the coveted personal grant that people get to do research…it’s bringing absolutely state-of-the-art technology that he’s inventing to do new gene therapy in Hawaiʻi and this is why we’re very proud of him,” said IBR Director Steven Ward.

I think the schools here in Hawaiʻi are underestimated
—Owens

“Not only is he faculty here, he got his PhD here, he was trained here, he was raised on the Big Island,” added Ward. “He’s the product of that and it just shows you that Hawaiʻi can do some of the world’s greatest biomedical research.”

In addition to the NIH funding, Owens recently signed a sponsored-research agreement with a private company specializing in non-viral gene therapies called SalioGen Therapeutics. The goal of this collaboration is to advance the tools he is developing in the lab into clinical-stage gene therapy candidates.

“I think the schools here in Hawaiʻi are underestimated really, but you can succeed coming out of Hawaiʻi, for sure,” Owens said.