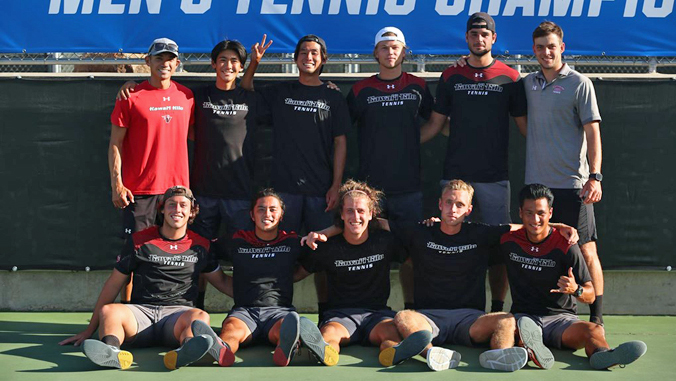 The University of Hawaiʻi at Hilo Vulcans won their second championship this season rallying from a 3-2 deficit for a 4-3 win over Hawaiʻi Pacific University (HPU) in the finals of the NCAA Division II West Region Championships. UH Hilo will head to the NCAA Championships for the third consecutive season, May 18–20 at the Surprise Tennis and Racquet Center in Arizona.

“I’m proud of the way the guys fought until the very end,” said head coach Kallen Mizuguchi after the match. “This was a stronger HPU team than we played at conference two weeks ago (a 4-1 UH Hilo win), and it shows the kind of program that Hendrik (Bode) runs and how hard those guys can fight. It has always been a team win, and everyone plays a big role on this team.”

The Vulcans will now wait to hear where they will be seeded at the national championships on these same courts. Unlike years past, only one team from each of the NCAA’s eight regions will be in the tournament, and will be seeded 1-8. The Vulcans are ranked No. 6 in the latest national rankings and are now 10-2 on the season.

“It’s nice to have these wins (APU and HPU) fall on our side, because they could have gone either way,” Mizuguchi added. “We will now rest up and recover these next few days and then get back to work.”

For more on the games, go to the UH Hilo athletics website.