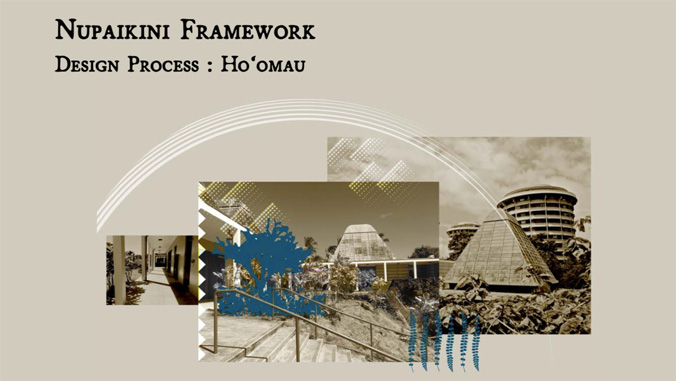 Jonathan Kekaimalu Stanich’s project, “Nupaikini: Towards a New Hawaiian Design,” proposed an alternative approach to maintaining the KCHS landscape by utilizing ʻāina (land) based values and perspectives through using a graphic style based on traditional Hawaiian aesthetics, and references 18th century Hawaiian nupepa (newspaper) in a graphic moʻokūʻauhau (genealogy).

Just as the kānaka (Hawaiian subjects) of the 18th century renaissance embraced the influx of new technologies around them, Stanich believes modern kānaka can also embrace revolutionary technologies in a Hawaiian way.

“One of the main reasons I chose Nupaikini as the title of this project is because taken together it is defined as ‘new-fashioned,’ and it was important to me to stress that although this process is inspired by many traditional Hawaiian values and perspectives, it is a synthesis of how I, as a modern Hawaiian, believe we should design the world around us in a contemporary way,” said Stanich.

The project provides a modern konohiki (resource managers) 21st century tools to kilo (observe), specifically the creation of a new spatial plant placement algorithm, which can use 3D modeling software to map specific microclimates within KCHS.

The algorithm then generates a list of plants that will grow best within those projected microclimates. This tool, coupled with on-site observations done by students and faculty, and coordinated requests for plant material and events, will help determine the right place for the right plant.

“As landscape architects, we have so much to learn from traditional Hawaiian land management systems and bio-cultural land and water practices,” said Judith Stilgenbauer, MLA program director and graduate chair. “Malu’s innovative proposed planting design process is applicable to many other, similarly situated design problems across UH campuses and the state.”

This effort is an example of UH Mānoa’s goal of Becoming a Native Hawaiian Place of Learning and UH Mānoa’s goal of Enhancing Student Success (PDF), two of four goals identified in the 2015–25 Strategic Plan (PDF), updated in December 2020. 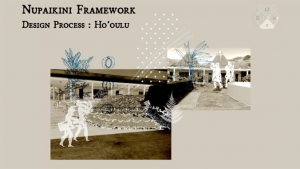 “The tools and methods outlined in this project can be taken and applied to other departments within campus to help share the workload to maintain the landscape and ultimately establish a connection between the university community and a Hawaiian sense of place,” said Stanich. “It is from this perspective where you cannot have a Hawaiian sense of place by planting native or canoe plants, the sense of place is generated by people interacting with those plants and shaping the landscape into something uniquely Hawaiian.”

Going forward, the project calls for the creation of student groups, faculty positions and larger community involvement in order to re-assume the role and responsibilities of a konohiki.

“This design, and the process from which it was generated, marks a shift in values and practices in what it means to maintain an institutional campus landscape,” added Stanich. “It encourages active participation within the campus landscape.”

The case study used in the project originated through the Noʻeau Program, in collaboration with UH Mānoa Building and Grounds Management, UH Mānoa Campus Arboretum and KCHS. Stanich wants to thank the many people who helped shape and guide him along this path, specifically Nōweo Kai, Roxanne Adams, Konia Freitas, Kekuewa Kikiloi, Andrew Kaufman, Phoebe White, Stilgenbauer and many others.