University of Hawaiʻi at Mānoa’s Snyder Hall, scheduled for demolition in June, will be remembered for its world-class research, and for many, being part of bygone era when laboratory animal science was a common practice at universities around the country. As researchers made groundbreaking discoveries, former students and employees from the 1970s and 1980s recall the eerie animal noises echoing through McCarthy Mall, where Snyder Hall is located.

The five-story concrete building was built in 1962 for $1.5 million. Snyder Hall was replaced in 2020 with the $65-million state-of-the-art Life Sciences Building located on the East-West Road end of McCarthy Mall.

Snyder Hall was among 37 new buildings constructed during the biggest campus expansion ever at UH Mānoa during the mid 1950s to mid 1960s. Initially spearheaded by then UH President Paul Bachman, the buildup was supported by a new generation of Democratic lawmakers, who had just ended a half century of Republican legislative control. Many of the lawmakers who overrode a governor’s veto to fund the expansion with tax increases were UH graduates and World War II veterans.

Bachman died unexpectedly in 1957, and was replaced by Laurence H. Snyder, an internationally known geneticist. During Snyder’s tenure as president from 1958 to 1963, UH doubled the number of students, academic courses, and degree programs offered. He also oversaw the construction of the new buildings and the installation of the iconic pedestrian thoroughfare, McCarthy Mall, one of Snyder’s proudest accomplishments.

One of the new buildings, the Health Research Institute Building, was renamed Snyder Hall in 1967 in his honor. 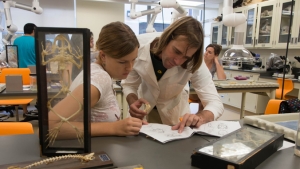 Snyder Hall was home to a number of internationally recognized academics performing cutting-edge research in biology and microbiology.

Here are just a few examples of the world-class research performed there over nearly six decades.

The Biological Electron Microscope Facility (BEMF) was established at Snyder Hall in 1984 by UH Pacific Biosciences Research Center Emeritus Professor Richard D. Allen. Allen was world renowned for his work on the model organism Paramecium. Over the years, BEMF has been utilized by more than a thousand researchers from UH, local technology companies, state and federal agencies and other academic institutions. BEMF’s state-of-the-art equipment is used to examine biological samples from viruses, bacteria and other microbes, invertebrates, vertebrates, plants and materials science samples such as photovoltaic thin films and fuel cell membranes.

The facility’s mission to provide instrumentation, training and services to the broader scientific community continues today in its new home in the Life Sciences Building.

Frogs and monkeys and sea lions, oh my!

The Laboratory Animal Service (LAS) was located on the 5th floor of Snyder Hall, which included an outdoor patio area. The early 2000s witnessed a major reduction in live-animal research due to increasing activism and rising costs, with the last animals leaving the building in 2007.

A wide array of animals were housed there, including mice, rats, rabbits, guinea pigs, chickens, cats, Xenopus frogs, owls and Rhesus monkeys. The Rhesus monkeys are apparently what made the most and loudest noises, which echoed through McCarthy Mall.

“The old-timers told me of some brazen escapes in the 1980’s,” said retired UH Mānoa LAS employee Norman Magno. “Individual Rhesus escaped the pens and climbed down the adjoining coconut trees, entered Webster Hall quietly, and attended psychology and nursing classes with students without them knowing that a monkey was in attendance. I have been told stories like this on several occasions.”

Magno also said the “old-timers claim that sometime in the 1970’s and before the establishment of the animal advisory committee (now referred to as the Institutional Animal Care and Use Committee), sea lions were housed in inflatable swimming pools on the 5th floor Snyder Hall Patio. Passersby often reported hearing dogs barking in the morning hours, that were actually the sea lions.” 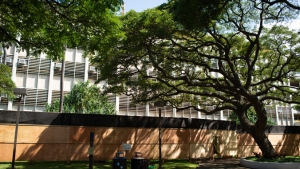 The demolition of Snyder Hall will be the latest completed project in the UH Mānoa’s Long Range Development Plan, following the demolition of Henke Hall in 2017, and construction of the now open Life Sciences Buildings in its place. The 2021 state Legislature approved funding for a new building on the Snyder Hall site that will have flexible learning and office spaces to support modern methods of online course delivery, collaboration and advising.

The plan identified Snyder Hall as the first of four buildings to be renovated, replaced or removed because of age and condition, and to reduce energy and maintenance costs. The other buildings are Holmes Hall, Keller Hall, and Kuykendall Hall.

Another project, the $41-million renovation of the Sinclair Library into a Student Success Center, is currently underway. The plan also calls for replacing campus interior roads with pedestrian malls, and removing more than 50 portable buildings on campus to create more open space.

This capital improvement effort is an example of UH Mānoa’s goal of Enhancing Student Success (PDF), one of four goals identified in the 2015–25 Strategic Plan (PDF), updated in December 2020.