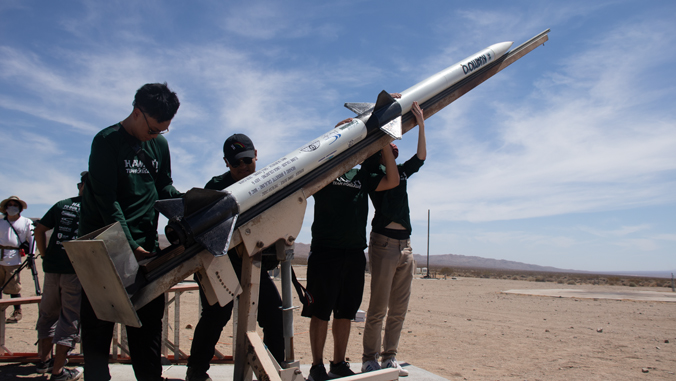 University of Hawaiʻi at Mānoa’s Team Hōkūlele won second place in the Friends of Amateur Rocketry (FAR) 1030 Competition on June 5. The team members from the College of Engineering successfully launched their 15-foot rocket and payload in the national competition in Mojave, Calif. 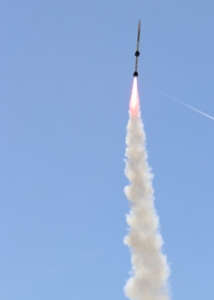 The students launched their rocket called Kuamoʻo (Milky Way) in the competition’s 30,000-foot category, a cruising altitude for some commercial airplanes. Seven other teams competed in the 30,000-foot division.

“Absolute chicken-skin moment that has me both nervous and excited. When I saw the rocket gain altitude, I knew that all of our hard work had paid off,” said Kailer Okura, Team Hōkūlele member.

Kuamoʻo was the first two-stage/motor rocket for Team Hōkūlele, which was established in 2019. The rocket reached a height of approximately 30,000 feet and protected its components from liftoff to touchdown. The team also created a radio-controlled rover capable of traveling a distance of at least 10 feet after touchdown.

The students ran into several issues with their rocket leading up to the competition, however, they were able to solve all of them before the launch. 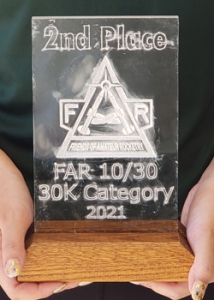 Team Hōkūlele is part of UH Aerospace Technologies, a Vertically Integrated Project (VIP). VIPs are uniquely designed to include faculty mentors, graduate student researchers and undergraduates from freshmen to seniors. The more experienced members mentor newer members, passing down their knowledge and expertise, and the process repeats itself annually.

This project is an example of UH Mānoa’s goals of Excellence in Research: Advancing the Research and Creative Work Enterprise (PDF) and Enhancing Student Success (PDF), two of four goals identified in the 2015–25 Strategic Plan (PDF), updated in December 2020.