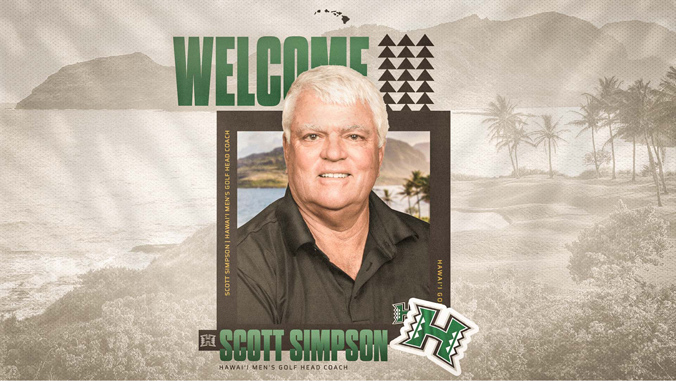 The professional golfer served as the UH Mānoa women’s golf assistant coach for the past two seasons helping the Rainbow Wahine post five Top 5 team finishes in a pair of pandemic-shortened seasons.

Simpson won seven times in a 27-year PGA Tour career, including the 1987 U.S. Open. He also recorded 15 runner-up finishes on tour and nine top 10s in major tournaments. His other professional wins include three times on the Japan Tour and four Hawaiʻi State Opens, including back-to-back in 1993 and 1994.

“We are thrilled to welcome and introduce Scott Simpson as the head coach of our men’s golf program,” Matlin said. “With more than 40 years of professional golf experience, we couldn’t ask for more while searching for a new coach. We didn’t have to look far either, as Scott has helped our women’s team achieve tremendous individual success. Scott shares our goals and believes we can field a successful and high quality men’s golf program. The future is bright for our Rainbow Warriors!”

“I’d like to thank David Matlin for giving me the opportunity to lead this program,” Simpson said. “We share a vision for going forward and I’m so excited to join the UH Athletics ʻohana. My goal is to help our men golfers learn, improve and grow in the classroom and on the course. We will work, prepare and compete hard while having a lot of fun. Go Rainbow Warriors!”

Simpson is the program’s eighth head coach since turning Division I.