Melioidosis is one of the most misdiagnosed and deadliest diseases in the world, with a wide range of symptoms that can be mistaken for staph infections or diseases such as tuberculosis. University of Hawaiʻi at Mānoa School of Life Sciences researchers, led by Professor Tung Hoang, were awarded a $3-million contract from the Defense Threat Reduction Agency in the U.S. Department of Defense to create a vaccine to protect against melioidosis.

The disease has a 50% mortality rate and is listed by the Centers for Disease Control and Prevention (CDC) as a Tier 1 select agent, a list that also includes anthrax and Ebola, because the biological agents and toxins in this category “present the greatest risk of deliberate misuse with significant potential for mass casualties or devastating effect to the economy, critical infrastructure, or public confidence, and pose a severe threat to public health and safety,” according to the CDC.

“The threat to the military and civilian population is real in case of bioterrorism and biowarfare events,” Hoang said. “We also send our servicemen and women into harm’s way stationed in endemic countries where they could be exposed to the bacterium and the disease. Of course, they need protection. Likewise with travelers, traveling to endemic countries.” 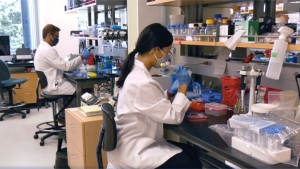 Melioidosis is caused by the Burkholderia pseudomallei bacterium. It is commonly found in rice fields, water and soil in numerous tropical countries up to 30 degrees latitude north and south of the equator, where the disease is endemic. People can become infected through cuts in their skin, or by consuming contaminated water or inhaling particles containing this bacterium. Domesticated and farm animals can also get the disease. Transmission between humans or between animals and humans is possible, but experts say it is rare or hard to document.

The disease skyrocketed during the Vietnam War, hence its common name—the Vietnam time bomb—which killed hundreds of soldiers. Helicopters landing in Vietnam propelled bacterial laden particles, which were buried in the sand and soil. Soldiers inhaled them, were misdiagnosed with pneumonia or tuberculosis, and died of melioidosis.

Yun Heacock-Kang, a junior researcher with the School of Life Sciences, said while the disease itself has not been confirmed in Hawaiʻi, the islands lie approximately 20 degrees north of the equator, making it a prime area for the bacteria to live or be transmitted to Hawaiʻi from another country.

“Because they reside in soil, if you have an importation of soil of potted plants between countries when it wasn’t well regulated, that could be a way for the bacteria to be transmitted,” Heacock-Kang said. “If people go hiking, they could have soil stuck on the sole of their boots, that could be carried around. Travelers have been diagnosed with Burkholderia pseudomallei infection in Hawaiʻi, although that was linked to the travel history, not local infections.” 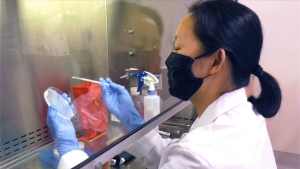 “This finding was significant because unlike most viruses, which have less than a dozen proteins, bacteria have thousands of different proteins. It’s like finding a needle in a haystack—finding which ones are important for infection and disease, and which ones can be used for an actual vaccine candidate,” Hoang said.

Hoang said they used the two proteins to create a vaccine and their study showed 100% effectiveness in mice. Unvaccinated mice died within five days, while 100% of vaccinated mice survived for at least one month, which was the duration of the study. Based on this finding, they submitted an application to the Defense Threat Reduction Agency, which was selected for funding.

“To develop this vaccine, we actually take the proteins by themselves and combine them with an adjuvant (substance to increase efficacy or potency) to stimulate the immune response,” said Ian McMillan, UH Mānoa microbiology PhD graduate and co-researcher on the project. “Our long term goal is to eventually take this vaccine and expand the testing into larger animal models. If successful, hopefully we’ll end up in clinical trials.”