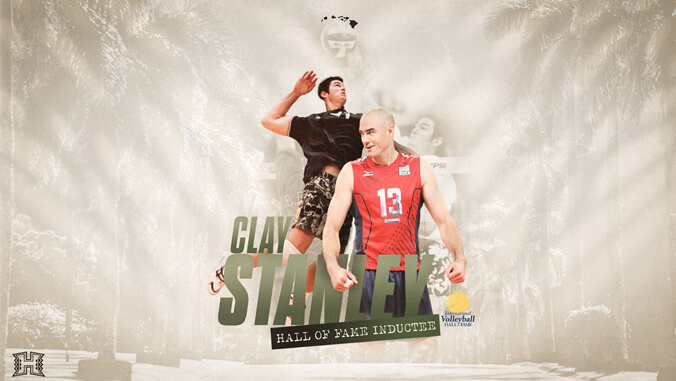 Former University of Hawaiʻi men’s volleyball standout, U.S. National Team member and three-time Olympian Clay Stanley was inducted into the International Volleyball Hall of Fame as part of the Class of 2021.

Stanley was a three-year letterman for the Rainbow Warriors (1997, 1999–2000) and finished among the program’s leaders in career kills and aces. He set the school record of 50 kills in a league playoff match against UCLA in 1999. As a senior, he ranked among the nation’s leaders in kills and set a school single-season record for aces while earning third-team all-MPSF honors.

Following his UH career, Stanley played for the U.S. National Team and competed in three Olympic Games. In the 2008 Beijing Games, he helped the U.S. capture its first gold medal in 20 years and was selected as the Most Valuable Player, Best Scorer and Best Server of the Olympics. He also enjoyed a more than 15-year professional career playing in Greece, Russia and Japan.

Stanley’s father, Jon, is also a member of the International Volleyball Hall of Fame. The two-time Olympian was inducted as part of the Class of 1992.

For more on Stanley go to the UH Mānoa athletics website.