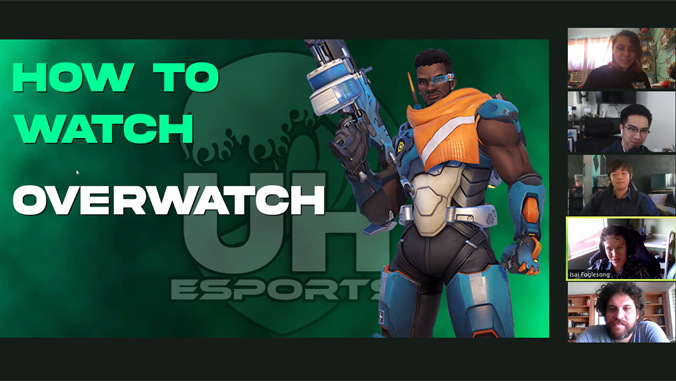 The University of Hawaiʻi at Mānoa hosted two Overwatch League (OWL) tournaments in May and June drawing tens of thousands of viewers from all across the world, with two more slated for July and August. Each winning team takes home $100,000. Interest has grown among many on campus who were not initially drawn to esports, and specifically, Overwatch. To bring everyone up to speed on the game, UH Mānoa’s esports teams hosted a virtual training session for Overwatch on June 30.

“After the first and second tournaments, we started to get questions about the best way to watch the game from people we were working with at the Information Technology Center (one of the host locations for the Overwatch teams),” said Nyle Sky Kauweloa, a communication and information sciences PhD student and head of the UH Mānoa Esports Task Force.

“That probably has come to a surprise for many, because spectating Overwatch is not as straightforward as watching, for instance, a boxing match or a golf tournament. There are a myriad of factors that one has to keep aware of at the end of the game. The goal for the workshop was to provide some context around the game, the terms used by the OWL casters and to have our student interns engage with our community.”

Kauweloa presented along with Kevin Nguyen, UH Mānoa esports program assistant, and student members Justin Chow, Isai Foglesong and Kelsy Padilla. Overwatch is described as a six-versus-six, fast-paced, online, shooting game in which teams must complete certain objectives depending on the map presented. It is not like a conventional battle royale or tactical first-person shooter, but a mixture of the two. Professional OWL teams compete in tournaments throughout the year with the winning team in the grand finals taking home $1.5 million.

During the workshop, the UH experts described what Overwatch is and explained the game’s terminology. They also showed a video they created explaining how to view Overwatch.

Visit this link to view the webinar.

Overwatch is part of the growing esports industry, whose revenue is projected to hit $1.08 billion in 2021. This, along with Overwatch’s appearance on campus, have made UH Mānoa’s esports footprint even more important. Students volunteering during the Overwatch tournaments earn an internship credit through the School of Communications in the College of Social Sciences. In addition, the school will host a three-course esports series beginning this fall.

“The reception on campus has been excellent,” Nguyen said. “Students want to be involved and they are really pushing themselves with this internship. Not only have UH students been excited, but this really did send ripples in Hawaiʻi students as well as the esports realm. I’m hoping we can continue this momentum.”

Chow, who is a sophomore Academy for Creative Media major, added, “Being a part of this internship allows me to get hands-on experience in a job field that I want to work in. I would describe this experience as a once in a lifetime experience. I got to meet so many wonderful people and learn how their job works.”