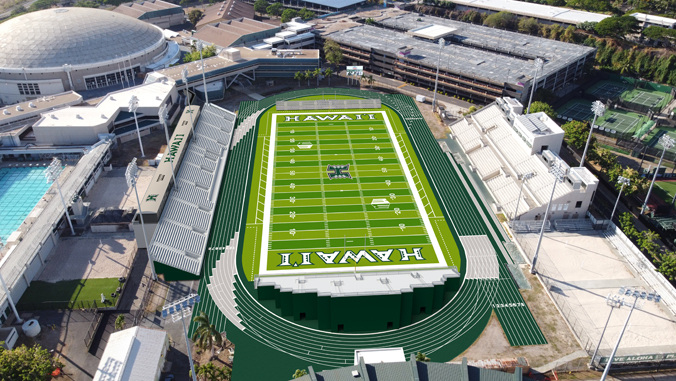 University of Hawaiʻi officials provided an update to the community on the progress of the construction of the football stadium at the Clarence T.C. Ching Athletic Complex at UH Mānoa on August 10, during a virtual town hall meeting with Honolulu council members.

UH Athletics Director David Matlin and UH Vice President of Administration Jan Gouveia made presentations on the facility upgrades and parking and traffic plans. Some parking will be available at nearby locations including the Japanese Cultural Center of Hawaiʻi.

About three dozen community members tuned in to hear the latest on the progress for the field and the plans for game days. They were able to provide feedback and ask more specific questions regarding their concerns.

Games are scheduled for 6 p.m. on six Saturdays during the season with projected end times around 10 p.m. Scheduling could change depending upon cancellations to other games of both conference and non-conference opponents.