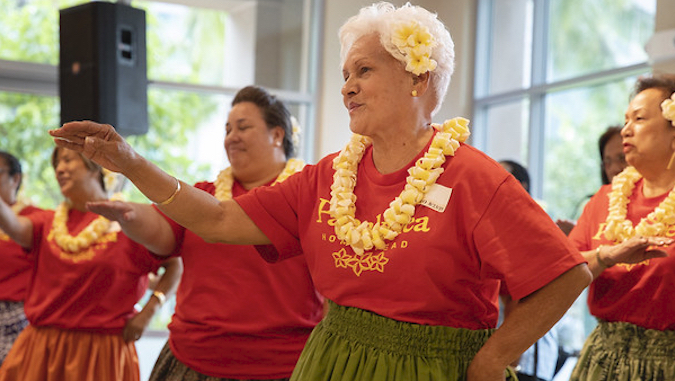 The adoption and testing of a lifestyle intervention grounded in the practice of hula previously found effective in improving blood pressure will be adapted to address a broader range of vascular risk factors for Alzheimer’s disease among Native Hawaiians and Pacific Islanders. This public impact research, based at the University of Hawaiʻi at Mānoa John A. Burns School of Medicine, is part of a $15 million national project funded by the National Institute on Aging (NIA) to battle disparities associated with Alzheimer’s disease and dementia in Native Hawaiian and Pacific Islander groups, as well as American Indian and Alaska Native.

NEAR aims to address this gap in public health research by leveraging scientific resources across a network of community and academic partnerships. This will be the first time that these Native populations have been included in this type of project grant from the NIA. Topics rarely studied in Native and Pacific Islander populations will be investigated, including the use of culturally informed practices such as the Hawaiian dance of hula to promote vascular health and prevent cognitive decline, and the role of sleep disorders in cognition.

“We are returning to the traditions of our ancestors to provide the solutions needed to address the most pressing health concerns of our communities today,” said Joseph Keaweʻaimoku Kaholokula, chair and professor of the Department of Native Hawaiian Health at JABSOM, and lead for the Hawaiʻi-based project.

Although Native Hawaiian, Pacific Islander, American Indian and Alaska Native communities are culturally and geographically diverse, all experience an unequal burden of conditions such as hypertension, type 2 diabetes and low socioeconomic status that make dementia more likely. Little is known about how Alzheimer’s disease and related dementias impact these populations—how these conditions can best be prevented, detected and treated, and what role genetic risk factors play.

“Our scientists are grounded in the lived experience and history of trauma surrounding research in Native and Pacific Islander communities,” said project co-leader Dedra Buchwald, a professor in WSU’s Elson S. Floyd College of Medicine, as well as the director of the Institute for Research and Education to Advance Community Health. “The team will bring an essential understanding of research ethics, stakeholder consultation and cultural humility to effectively and appropriately test interventions to detect and treat dementia in these groups.”

Twelve professionals who are either American Indian, Alaska Native, Native Hawaiian or Pacific Islander have committed to participate as investigators or consultants, and all major sectors of the project are co-led by an investigator who is a member of one or more of these communities.

“NEAR is a true partnership between Indigenous communities, scientists of Indigenous heritage, and leaders and organizations that genuinely desire to work with Indigenous populations to create outcomes that these groups desire,” said project co-leader John Kauwe, professor of biology and president of Brigham Young University–Hawaii. “As part of the leadership team, I’m proud to honor my Native Hawaiian ancestry through this vital effort.”