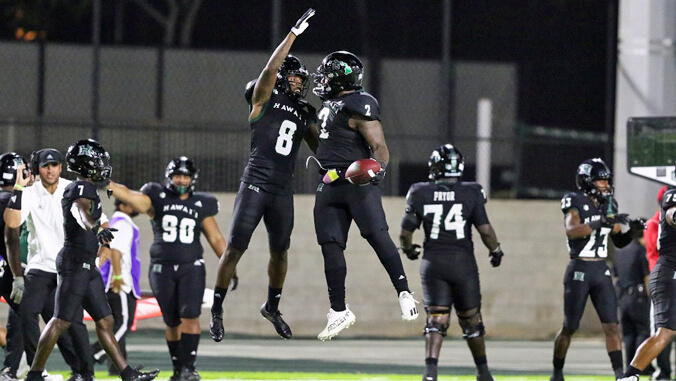 The University of Hawaiʻi at Mānoa football team ushered in a new era with a 49-35 win over Portland State in its 2021 home opener. Playing its first-ever on-campus game at the Clarence T.C. Ching Athletics Complex, UH raced out to a 28-0 first quarter lead and never looked back to snag its first win of the year.

UH scored on its first four possessions of the game, produced a multitude of explosive plays (11 plays of 20+ yards) and finished with 49 points, its largest output in 11 games under Head Coach Todd Graham, and 573 yards of total offense.

The Rainbow Warriors (1-1) racked up 246 yards and 12 first downs in the opening quarter alone, including five plays of 20 or more yards, three of which were touchdowns. Nick Mardner scored the first touchdown in the history of the Clarence T.C. Ching Athletics Complex with a 23-yard catch from Chevan Cordeiro in UH’s opening possession of the game. Those were followed by touchdowns by Calvin Turner Jr. (34-yard rush), Jared Smart (20-yard catch) and Dedrick Parson (17-yard rush).

For more on the game, go to the UH athletics website.

The Warriors will next head for the road where they will meet their second Pac-12 opponent of the season when they take on Oregon State on Saturday, September 11 in Corvallis. Kickoff is at 8 p.m. PST/5 p.m. HST.