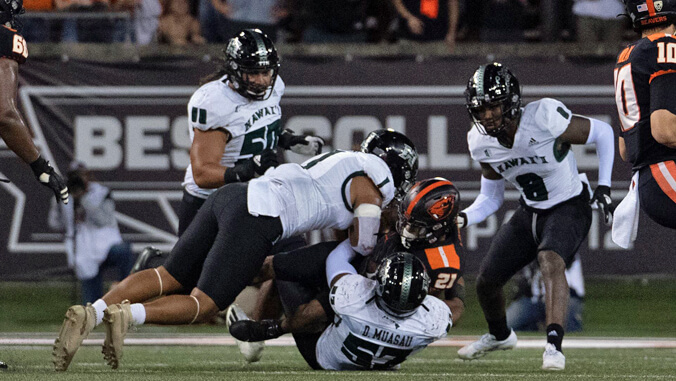 For the second time this season, the University of Hawaiʻi at Mānoa Rainbow Warrior football team found rough sledding against a PAC-12 team on the road with a 45-27 loss to Oregon State on September 11, at Reser Stadium. UH dropped to 1-2 on the season.

UH suffered a devastating first quarter from which it couldn’t recover. The Beavers jumped out to a 21-0 lead in an opening frame that saw UH out-gained, 219-36 yards on offense.

Playing catch-up all night long, UH moved the ball successfully after its shaky start. Despite not throwing for a single yard in the first quarter, Chevan Cordeiro finished with 366 yards passing and a pair of touchdowns. Calvin Turner Jr. scored three touchdowns—two rushing and one receiving—while racking up 191 all-purpose yards. Turner (106 yards) and Nick Mardner (110 yards) each finished with 100-yard receiving games while each recorded a touchdown catch.

With the loss UH remains winless in three visits to Corvallis, Oregon.

Read more about the game at the UH Mānoa athletics website.