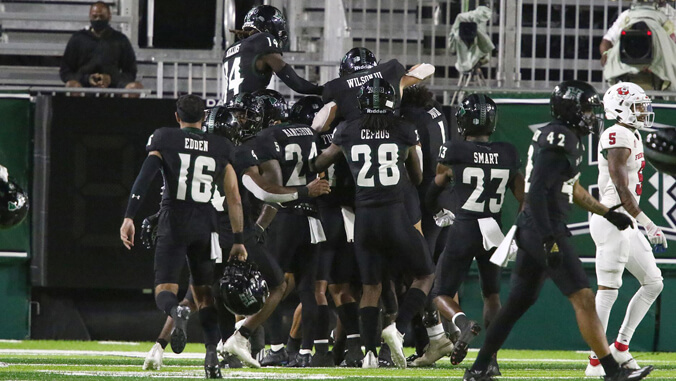 The University of Hawaiʻi at Mānoa football team picked up a monumental win with a 27-24 come-from-behind upset of No. 18 Fresno State Saturday, October 2 at the Clarence T.C. Ching Athletics Complex. The Rainbow Warriors improved to 3-3 overall and 1-1 in the Mountain West with their fourth straight Homecoming win.

The conference match-up had not favored the Warriors, who dropped eight out of the last 10 to the Bulldogs but the defense stepped up big forcing six turnovers. Safety Khoury Bethley led the way with two interceptions and a critical forced fumble, which set up the game-winning field goal by Matthew Shipley.

This was UH’s first win over a ranked opponent in more than a decade and snapped a six-game home losing streak to the Bulldogs.

Bethley and Schager were recognized by the Mountain West for their performances and all-purpose back Turner was named to the Paul Hornung Award Honor Roll for the second time this season.

The Warriors will now enjoy a bye before returning to action on Saturday, October 16 for another nationally-televised matchup at Nevada. Kickoff is at 4:30 p.m. HST.

For more on the game go to the UH Mānoa athletics website.