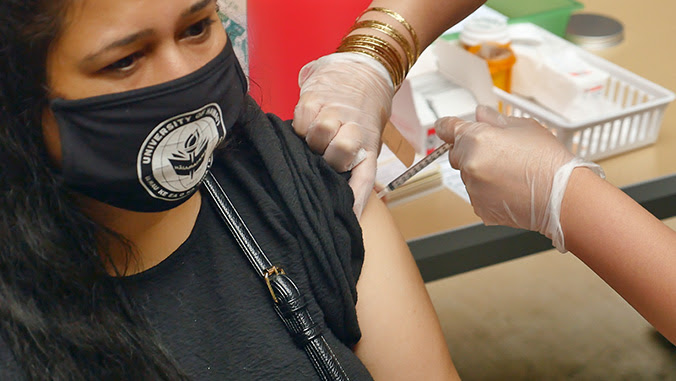 If only 60% of University of Hawaiʻi students at all 10 campuses were fully vaccinated, it is estimated an additional 3,000 cumulative COVID-19 cases could have been detected in Honolulu County over a six-week period (August 10–September 30), according to a compartmental mathematical model developed specifically for the State of Hawaiʻi. This is one of several findings from a study by UH Mānoa’s Department of Mathematics and the Hawaiʻi Pandemic Applied Modeling work group to show the effects the entire UH student population has on the wider community. The study used an optimistic vaccination rate of 95%, which is close to the actual estimated vaccination rate, for comparison.

According to a survey of UH students in August, more than 90% have been vaccinated for the COVID-19 virus or plan to be. About 27% of the 45,930 students registered for the fall 2021 semester responded to the survey. The findings are similar to the student survey from late June.

“The bottom line is that not only will there be significantly less cases in Honolulu County if more of our students are vaccinated, but there will be significantly less asymptomatic cases in unvaccinated individuals,” UH Mānoa Department of Mathematics Professor Monique Chyba said. “This would lead to less unvaccinated asymptomatic individuals eventually developing symptoms followed by a possible hospitalization, alleviating additional stress on the health care system.”

The study used a 95% UH student vaccination rate in its modeling and it predicted 23,093 cumulative cases in Honolulu County during a six-week period from August 10–September 30, of which 15,059 would have been unvaccinated individuals. However, if only 60% of UH students are vaccinated, the cumulative case count for the same time frame was predicted to be 26,068, of which 16,443 would have been unvaccinated. Also, the modeling showed a 25% decrease in the daily case count for September 30 for Honolulu County, if 95% of registered UH students were vaccinated compared to 60% (332 cases vs. 248 cases).