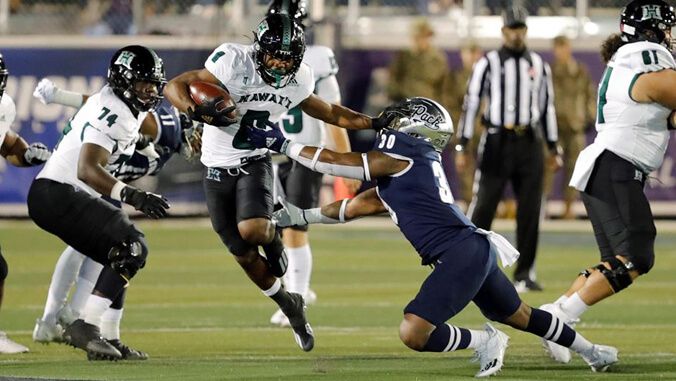 The University of Hawaiʻi at Mānoa Rainbow Warrior football team went toe-to-toe with the University of Nevada for one half before the Wolf Pack pulled away after the break for a 34-17 decision on October 16 at Mackay Stadium in Reno, Nevada. UH dropped to 3-4 overall and 1-2 in the Mountain West.

The Wolf Pack (5-1, 2-0) scored 17 unanswered points in a nine-minute stretch bridging the second and third quarters to defeat the Rainbow Warriors for the first time since 2018.

The first half was a back-and-forth battle with the teams trading scores. But UH was ultimately undone by five turnovers and a pair of special teams miscues that led to 24 Nevada points.

Freshman Brayden Schager made his first career start on the road for UH and finished 22-of-39 for 205 yards and four interceptions. Khoury Bethley finished with a team-high 13 tackles, one short of his career high.

The Rainbow Warriors next return home for their first game with fan attendance when they take on New Mexico State on Saturday, October 23. Kickoff is 6 p.m. at the Clarence T.C. Ching Athletics Complex. At the game UH will pay tribute to the late Colt Brennan, who passed away earlier this year.

For more on the game go to the UH Mānoa athletics website.