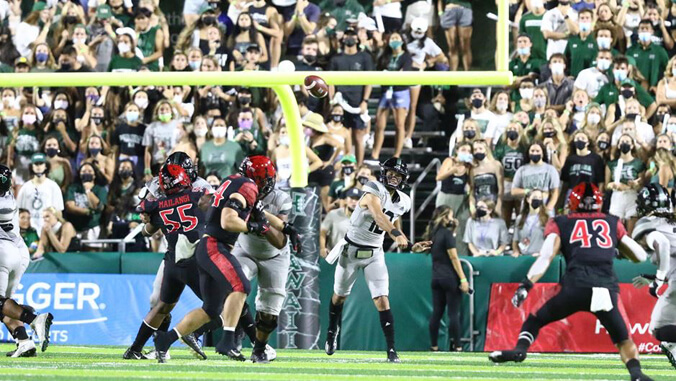 In a battle of two air-tight defenses, the University of Hawaiʻi at Mānoa fell to San Diego State University, 17-10, November 6 at the Clarence T.C. Ching Athletics Complex. It was the third straight conference loss for the Rainbow Warriors who fell to 4-6 overall and 1-4 in the Mountain West Conference (MWC).

Saturday’s game marked Hawaiʻi’s first home game without crowd restrictions and UH welcomed a boisterous and energized fan base. What the crowd got was a defensive battle. The Rainbow Warriors held San Diego State to just 227 total yards, a season-low for a Hawaiʻi opponent. But the nationally-ranked Aztecs’ (8-1, 4-1 MWC) unit ended up getting the upper hand, stopping UH’s final drive on the 18-yard line as time expired.

Chevan Cordeiro completed 19-of-34 for 175 yards and one touchdown—a 19-yard pass to Calvin Turner Jr., in the first quarter that tied the score at 7-7. UH racked up just 260 yards of total offense and tied a season-low with 10 points. Matthew Shipley converted a 22-yard field goal, his 11th of the season.

For more on the game, go to the UH Mānoa athletics website.

UH now heads back to the mainland for its sixth road game of the year when it travels to Las Vegas for a matchup with UNLV. Kickoff is set for 1 p.m. PST/11 a.m. HST. 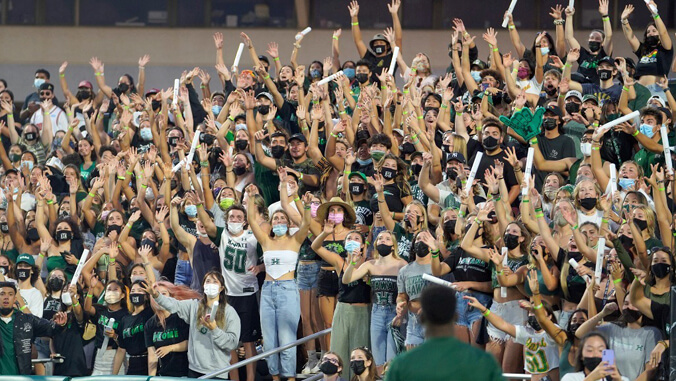