Update January 9, 2022: View performances of En Saga by Jean Sibelius and Finale to Symphony No. 1 by Johannes Brahms.

Joseph Stepec described taking the stage for the first time in more than 20 months, in historic Kawaiahaʻo Church, as “one of the strongest concerts” he has ever conducted for the University of Hawaiʻi at Mānoa. Stepec is an associate professor and the UH Mānoa Symphony Orchestra (UHSO) director. The orchestra performed together in front of a live audience for the first time since the start of the COVID-19 pandemic on November 28.

“It was an emotional experience. One of my students actually described it as a holy experience,” —Stepec

UHSO performed music from John Cage, Jean Sibelius and Johannes Brahms. The program was artfully created to mimic a musical journey. It began with Cage’s 4′33″, which allowed the performers and audience to travel to a meditative state and acknowledge the space they were in. The next piece, Sibelius’ En Saga, is about the power of nature, and the concert concluded with the Finale to Symphony No. 1 by Brahms, which journeys from darkness to light and ends triumphantly. Admission was free and open to the public (proof of vaccination was required).

“It was wonderful to make music with the UHSO again, especially in front of an audience after so long,” said Ethan Stanfield, a junior music performance major and french horn player in UHSO. “I am also incredibly grateful to have had the opportunity to play the famous alphorn solo in the Brahms and am proud of how much the group has improved over the course of this semester. I couldn’t have asked for a better performance of what we all worked so hard to achieve.”

Stepec added, “It was an emotional experience. One of my students actually described it as a holy experience. The ensemble was amazing.”

The video of the performance will be posted on the UHSO Facebook page at a later date.

Music from the Baroque 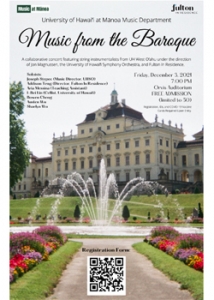 UHSO will host another concert on December 3, at UH Mānoa’s Orvis Auditorium, in partnership with string instrumentalists from UH West Oʻahu under the direction of Associate Professor Jon Magnussen. The concert will feature Baroque music from Western Europe in the 17th and 18th centuries. It begins at 7 p.m., and admission is free. The concert will be limited to 50 guests and proof of COVID-19 vaccination will be required. Learn more about the concert and how to attend.