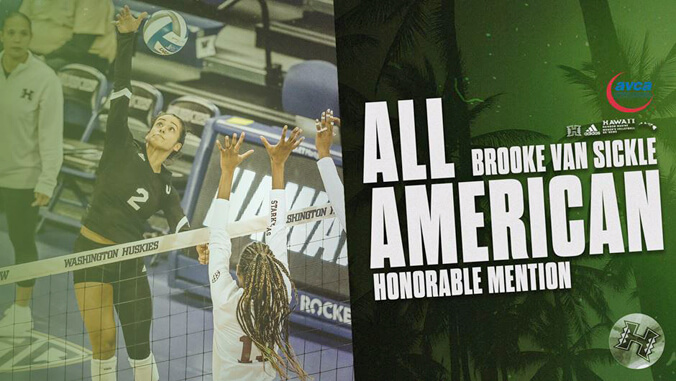 The senior outside hitter helped lead UH to its second-straight Big West title and its 39th appearance in the NCAA tournament. In her final season as a Rainbow Wahine, the versatile Van Sickle was voted Big West Player of the Year and finished the year averaging a conference-best 4.47 points per set. She led UH in kills (384), kill/set (3.73), service aces (38), aces/set (0.37) and points (460.5). She was second on the team with 324 digs and third (behind UH‘s middle blockers) with 63 total blocks.

Van Sickle is just the 13th Rainbow Wahine to earn AVCA All-America honorable mention honors. She is the lone player from the Big West Conference to earn All-America recognition.

Van Sickle has also performed well in the classroom—she was named to the 2021 College Sports Information Directors of America (CoSIDA) Academic All-District 8 team for maintaining a 3.57 grade-point average in her graduate studies after earning her bachelor’s in economics in spring 2021.

The group of honorable mention selections includes a combination of players named Conference Player of the Year and 30 additional players identified by the 11 members of the AVCA All-America Committee.