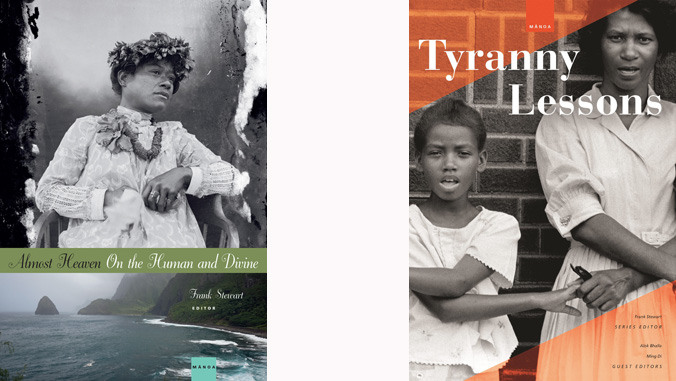 Prominent historical figures Father Damien, a Belgian priest who cared for leprosy patients on Molokaʻi, and civil rights leader Martin Luther King Jr. are celebrated by the University of Hawaiʻi Press in two issues. The biannual publication, Mānoa: A Pacific Journal of International Writing relaunched previously published issues to pay homage to both men, who were born in January.

“In these issues we honor the sainted missionary Father Damien, and also remember Dr. King’s connection to Hawaiʻi,” said Mānoa journal editor Frank Stewart. “During the Selma March in 1965, he, John Lewis, and other leaders wore lei sent in solidarity to Selma by Rev. Abraham Akaka, who met Dr. King at the University of Hawaiʻi the year before.”

The Hawaiʻi State government recently recognized January as Kalaupapa Month in honor of the place on Molokaʻi’s remote north shore where Damien cared for leprosy victims. Almost Heaven: On the Human and Divine (winter 2011) presents Aldyth Morris’s play Damien in its entirety and a set of images reproduced from glass-plate negatives made in Kalaupapa in the early twentieth century. The images are from the collection of the Congregation of the Sacred Hearts United States Province. Morris was a Hawaiʻi playwright who received the Hawaiʻi Award for Literature in 1978 and worked for many years at UH Press.

Tyranny Lessons: International Prose, Poetry, and Performance (summer 2020) features photographs from the 1960s by Danny Lyon from his book Memories of the Southern Civil Rights Movement. Lyon was the first photographer of the Student Non-violent Coordinating Committee and was jailed alongside King. Working next to activists such as Julian Bond and Howard Zinn, Lyon captured sit-ins, church bombings, speeches by John Lewis and other leaders, and the arrest and jailing of protestors.

Launched in 1989, Mānoa brings the literature of Asia, the Pacific, and the Americas to English-speaking readers and has published more than 60 volumes. The award-winning literary journal includes American and international fiction, poetry, artwork, and essays of literary interest.

Members of the UH community can view the works for free via Project Muse.