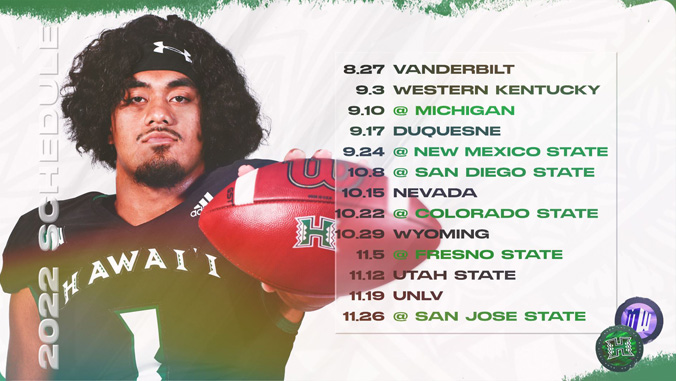 The 2022 University of Hawaiʻi at Mānoa football schedule features seven home games beginning with a non-conference match-up against Vanderbilt on August 27 at the Clarence T.C. Ching Athletics Complex.

The 13-game schedule also features six road games highlighted by a trip to “The Big House” where the Rainbow Warriors will play Michigan on September 10 in Ann Arbor for the second time since 2016.

UH will play a total of five non-conference games before opening the Mountain West portion of the schedule. Hawaiʻi will also host Western Kentucky and Duquesne at Ching Athletics Complex and play at New Mexico State in Las Cruces, New Mexico, for the second consecutive year.

All home games will be played at Ching Athletics Complex for the second straight year. Deposits for 2022 season tickets are currently being accepted at Etickethawaii.com.

The 2022 season marks the first under new head coach Timmy Chang, the former record-setting quarterback for the Rainbow Warriors.

For more on the 2022 UH football schedule, go to hawaiiathletics.com.