Astronomy haumāna (students) at Waipahu High School were commended for their research efforts and rewarded with observation time at some of Hawaiʻi’s leading telescopes. The Maunakea Observatories announced four haumāna will be given time to utilize a telescope on Maunakea or Haleakalā to conduct astronomical research that supports their submitted proposals.

This is the fifth time since the program’s inception in 2015 that student proposals from Waipahu High School have been awarded. Throughout the history of the program, Maunakea Scholars has worked with more than 600 haumāna statewide.

“In the field of space and astronomy, it’s a huge huge huge field,” said Emily Phanphongsa, a senior at Waipahu High School. “I was very shocked at just being able to do the research about such large things and like the larger aspect of what the galaxy has to offer.

The students were selected by a time allocation committee comprised of professional astronomers. Mentors from the University of Hawaiʻi’s Institute for Astronomy (IfA) worked with haumāma for months, analyzing data and preparing professional-style research proposals. The student observers were selected based on viability, creativity and potential.

Designed to bring Hawaiʻi’s high schoolers into one of the world’s most advanced observatory communities, Maunakea Scholars helps aspiring astronomers envision their potential of pursuing a career in STEM-related fields. It is the first program of its kind internationally to allocate observing time at major observatories for the direct educational advancement of students. To qualify, students in participating schools must conduct astronomical research and assemble a comprehensive proposal that can be conducted at an observatory. Selected proposals are then matched with graduate students from IfA and telescope staff to individually guide them through their research.

“Working with the Maunakea Scholars program opened doors for myself and my students that I never thought possible,” said Tessie Ford, a science teacher at Waipahu High School. “Watching our freshmen grow over the course of the year while working on their proposals has been so rewarding.”

“Adding the Daniel K. Inouye Solar Telescope observing time to the Maunakea Scholars program [this year] brings the Sun closer to Hawaiʻi students,” said Doug Simons, director of the UH Institute for Astronomy. “It is exceptional that a local student from Waipahu High School will be amongst the first to view the Sun’s activity with unprecedented resolution. Mahalo to the Inouye Solar Telescope team for making this possible.”

Initiated by Canada-France-Hawaiʻi Telescope and Gemini Observatory, and in partnership with the Maunakea Observatories and the Hawaiʻi State Department of Education, Maunakea Scholars successfully launched in 2015 to bring Hawaiʻi’s aspiring young astronomers into the observatory community. 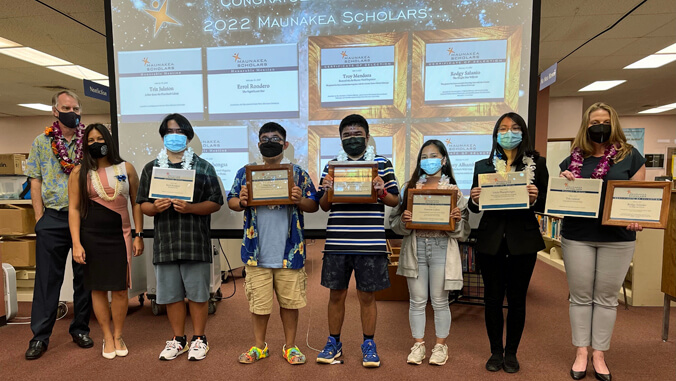