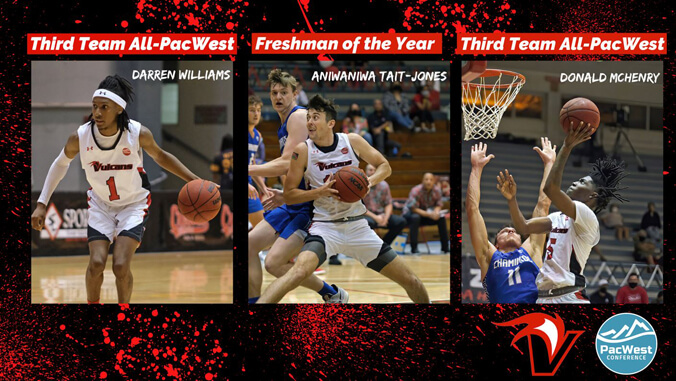 University of Hawaiʻi at Hilo men’s basketball players were named to the All-Pacific West Conference teams, including PacWest Conference Freshman of the Year and First Team member Aniwaniwa Tait-Jones. The forward from New Zealand earned the honor for his all-around work throughout the 2021–22 season. Donald McHenry and Darren Williams received Third Team All-PacWest honors.

Tait-Jones leads the Vulcans in points, rebounds, steals and blocked shots. He is the sixth-highest scorer in the PacWest and had a career-high of 30 points against Concordia. Tait-Jones is the first Vulcan named to the All-PacWest First Team since Salim Gloyd in 2015–16.

McHenry started in all 26 games for the Vulcans and is the eighth-highest scorer in the PacWest averaging 15.2 points a game. McHenry scored in double digits in all but three games, scoring 20 points and above in five games. He was named PacWest Player of the Week once.

Williams leads the PacWest in assist to turnover ratio, having the second-most assists in the league. He also has the sixth-highest free throw percentage and the eighth-most steals. Williams is also UH Hilo’s third-highest scorer totaling 300 points this season.

For more go to the UH Hilo athletics website.