A University of Hawaiʻi at Mānoa program aimed at increasing the number of Native Hawaiian students who attend and graduate from a UH campus earned a coveted award for its efforts. Nā Pua Noʻeau (NPN) UH Mānoa received the 2022 Hawaiʻi Children’s Action Network (HCAN) “Champions for Children Unsung Hero” award, which recognizes individuals who made a profound difference for keiki in their community.

“Nā Pua Noʻeau UH Mānoa has developed and tested virtual programs containing hands-on and interactive culture-based learning that is rooted in cultural identity,“ said Letoto-Ohata. “Using the ʻohana as the backbone of learning and development, STEAM (science, technology, engineering, arts and math), literacy, and college and career pathways are integrated into each session.”

NPN, which is part of the campus’ Hawaiʻinuiākea School of Hawaiian Knowledge and Native Hawaiian Student Services, has run programs for students from pre-kindergarten through 12th grade since 1989. Centers are stationed at UH Mānoa, UH Hilo, UH Maui College, Kauaʻi Community College and UH West Oʻahu. NPN provides haumāna (students) of all ages along with their ʻohana a plethora of first-class learning opportunities ranging from visual and culinary arts, literacy and STEM aimed at providing direct access and a bridge between the community and higher education. 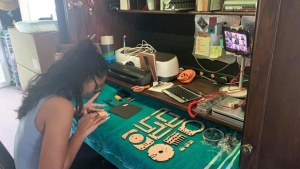 Gomes and Letoto-Ohata will be honored at the HCAN Champions for Children annual fundraiser and awards ceremony on April 6 at The Royal Hawaiian hotel.

This program is an example of UH Mānoa’s goal of Becoming a Native Hawaiian Place of Learning (PDF) and Enhancing Student Success (PDF), two of four goals identified in the 2015–25 Strategic Plan (PDF), updated in December 2020.