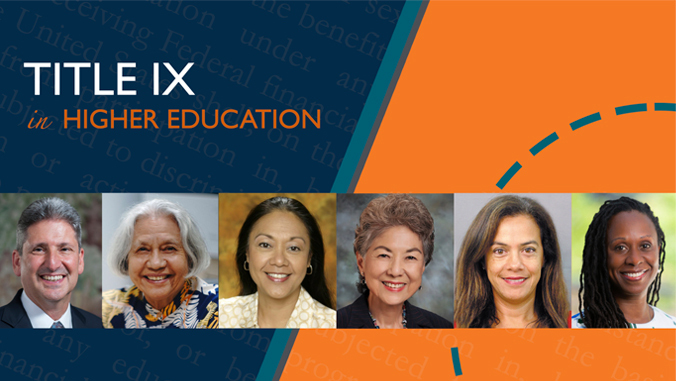 As part of a series of celebratory programs leading up to the 50th anniversary of Title IX in June, leaders from the University of Hawaiʻi discussed the history and future of Title IX in Hawaiʻi and across the U.S. on March 31. UH President David Lassner provided opening remarks to this panel discussion.

To honor the late U.S. Congresswoman Patsy Takemoto Mink’s profound and successful efforts to bring gender equity to education, Congress renamed Title IX as the Patsy T. Mink Equal Opportunity in Education Act. The act states, “No person in the United States shall, on the basis of sex, be excluded from participation in, be denied the benefits of, or be subjected to discrimination under any education program or activity receiving Federal financial assistance.”

“People could have written hundreds of pages and not accomplished what these 37 words have done,” said Lassner. “She was denied admission to medical school and decided to enroll in law school. I have no idea what Patsy would’ve accomplished as a doctor, but it’s hard to imagine that she could’ve had the impact on Hawaiʻi and the nation and beyond that she had with her law school education, and then what she accomplished as a public servant thereafter.”

The panelists represented a cross-section of leaders from across the UH community, with experience at UH since the 1960s. Through personal reflections of their own journeys, the panelists provided an overview of how Title IX has changed higher education. They talked about the ways in which Title IX has provided opportunities in higher education and athletics, and the ways in which it has expanded protections for students from violence on campus.

“This discussion of Title IX is important because we often take for granted the wonderful diversity within our UH community today that is possible because of Title IX,” said Troy Andrade, an associate professor of law at the UH law school and panel moderator. “It is also important because we often fail to realize the threat that Title IX has been under in recent years.”