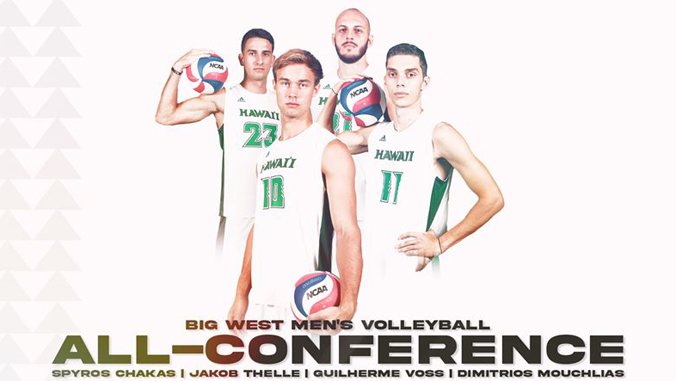 Four members of the University of Hawaiʻi at Mānoa men’s volleyball earned spots on the All-Big West teams. The selections by the league’s six head coaches were announced on April 20.

Three of the four were picked to the first team—setter Jakob Thelle, outside hitter Spyros Chakas and middle blocker Guilherme Voss—while opposite Dimitrios Mouchlias was named honorable mention.

Among UH‘s four selections, only Thelle had previous All-Big West honors as an honorable mention in 2021. Chakas was named to the all-freshman team a year ago.

Thelle and Chakas are among the most prolific servers in the country. Thelle ranks No. 3 with 51 aces and while Chakas is 12th with 42 aces. A native of Tonsberg, Norway, Thelle is on the verge of breaking the single-season ace record of 54 held by Mark Presho (1993) and Clay Stanley (2000).

Read more about their great performances this season at HawaiiAthletics.com.