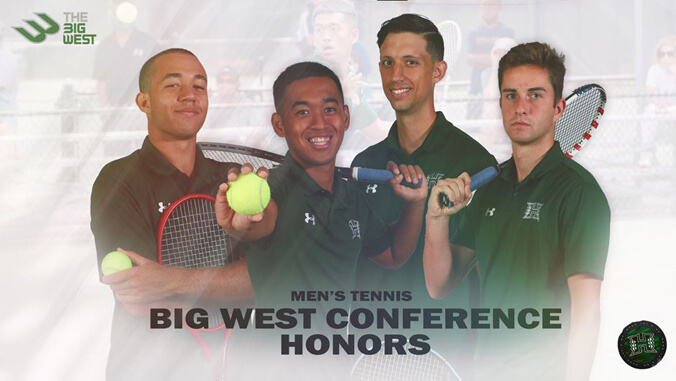 Ilagan is just the second UH player to be named Big West Player of the Year and the third to ever be named conference Player of the Year. In singles, Ilagan played at the No. 1 spot for UH, posting a 9-4 overall record and 3-1 conference mark. He was ranked as high as 11th nationally in singles in the Intercollegiate Tennis Association rankings, and currently sits in 40th in the latest edition.

In doubles, Ilagan and Collinswent 9-2 overall and 4-1 in conference play as the Rainbow Warriors’ top duo.

This is Seric’s second all-Big West honor in singles. Last year, he was named honorable mention. The senior posted a 6-5 dual match record and was 2-2 in conference action and played all but one match at No. 2 in the lineup.

In doubles, Seric and partner Labrunie garnered honorable mention honors after recording a 2-2 record in both dual and BWC matches this season.