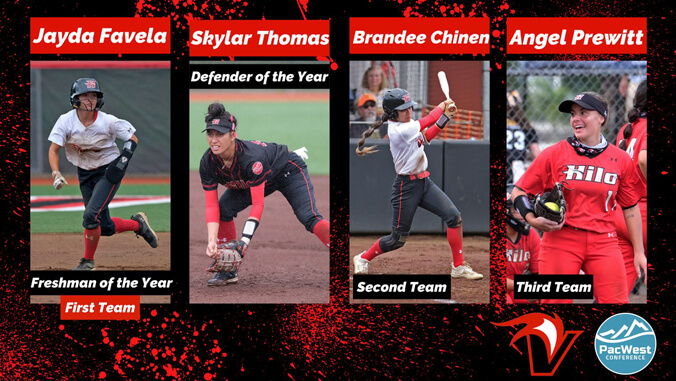 The University of Hawaiʻi at Hilo softball team received two PacWest Player of the Year honors and three All-PacWest selections for the 2021–22 season.

Jayda Favela led the squad as the PacWest’s Freshman of the Year and a First Team All-PacWest selection. Favela started every game at shortstop for the Vulcans. She ended the season with a .983 fielding percentage, making only three errors out of 178 chances. She was also a part of 12 doubles plays (fifth-most in the conference) and had 117 assists (second-most in the conference). She also had the second-most stolen bases in the PacWest with 20.

Senior Skylar Thomas received a special award as PacWest Defender of the Year. Thomas had the third-highest fielding percentage (.997) and third-most putouts (298) in the PacWest. She had one error the entire season out of 313 chances. She was also a part of nine double plays as the Vulcans first base starter.

Brandee Chinen received her first All-PacWest recognition as a Second Team selection. Chinen has the fifth-best batting average in the PacWest, leading her team with a .370 batting average, .859 OPS, .467 slugging percentage, and a .392 on-base percentage.

Angel Prewitt was named Third Team All-PacWest, starting every game for the Vulcans at center field. She batted .327 with 33 hits and five doubles. She also had a season high of three hits against Academy of Art University—two of those hits were doubles.