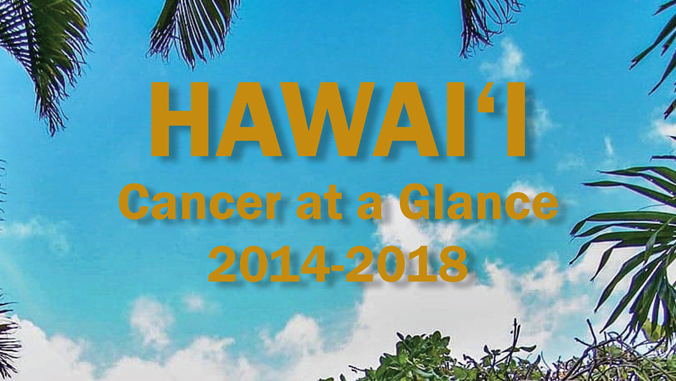 Cancer is the second leading cause of death in Hawaiʻi. A new report informing the community about the impact of cancer across the state was released by the University of Hawaiʻi Cancer Center’s Hawaiʻi Tumor Registry. The publication, Hawaiʻi Cancer at a Glance, 2014-2018, includes updated cancer statistics and describes the numbers and rates of individuals newly diagnosed with cancer, those surviving after a cancer diagnosis, and deaths that result from cancer. Hawaiʻi’s cancer burden is also compared with that of the United States overall.

The Hawaiʻi Tumor Registry is responsible for cancer surveillance in the state of Hawaiʻi and collects confidential data on cancer diagnosis, treatment and outcomes that tracks cancer trends in the state and across the nation.

“Research is key to ultimately reducing the suffering from this disease that touches so many in our community,” said Brenda Hernandez, Hawaiʻi Tumor Registry principal investigator.

Hawaiʻi’s geographical and demographic diversity plays an important role in the report on variations in cancer incidence and mortality by county, and across various racial and ethnic groups. Disparities in cancer risk and outcomes across racial and ethnic groups may reflect genetic variations as well as differences in diet, tobacco and alcohol use, obesity and other lifestyle exposures.

Annually, an average of 7,393 Hawaiʻi residents are diagnosed with invasive cancer and 2,393 individuals die from this disease. There are more than 66,779 Hawaiʻi residents who are cancer survivors. Lung cancer continues to be the leading cause of cancer deaths in the state. Breast cancer remains the most frequently diagnosed cancer among women, while prostate cancer is the most common cancer among men.

Understanding the burden of cancer in Hawaiʻi is critical in identifying priorities and needs with respect to cancer research, community education and cancer care, such as screening, diagnosis and treatment.

The Hawaiʻi Tumor Registry plays a significant role in the UH Cancer Center’s mission to reduce the burden of cancer by identifying cancers with excess incidence and mortality in Hawaiʻi’s population for which research is needed on prevention, early detection and treatment. Comparisons found in cancer statistics across racial and ethnic groups also allow identification of high-risk populations. Additional research on diet, lifestyle and genetics is necessary.