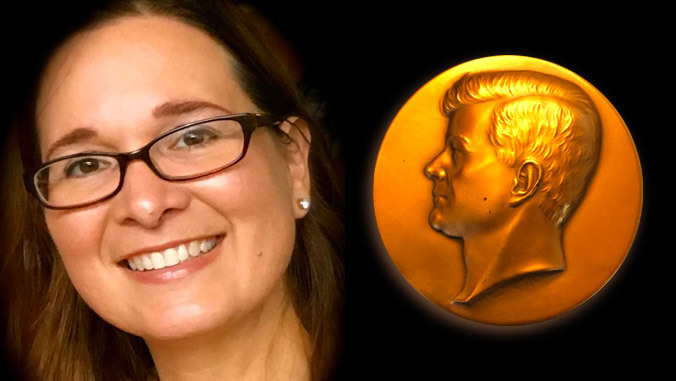 The founder of the University of Hawaiʻi at Mānoa’s inaugural Hawaiian Theatre program has earned one of the greatest honors in theatre education. The Kennedy Center, a world-renowned performing arts facility in Washington, D.C. which serves the nation as a leader in arts education, awarded Tammy Hailiʻōpua Baker a Medallion of Excellence for her trailblazing vision in Indigenous arts.

The Kennedy Center American College Theater Festival honored Baker during its virtual awards ceremony on May 21, calling her an incredible force and identifying her theatre program as a guide to demonstrate how to restore language and reclaim the stories of generations of Indigenous populations.

Baker, who is also a respected Hawaiʻi playwright, launched the Hawaiian Theatre, or hana keaka program, within the UH Mānoa Department of Theatre and Dance in 2014 centered around Hawaiian language revitalization, and the empowerment of cultural identity through stage performance. The program made history at UH Mānoa after its inaugural production, Lāʻieikawai, became the first ʻōlelo Hawaiʻi (Hawaiian language) play performed on the mainstage at the campus’ Kennedy Theatre. In 2019, sold out crowds reveled after the production, ʻAuʻa ʻIa: Holding On, a play Baker both authored and directed. The 52-member cast topped headlines after receiving an invitation to perform off-Broadway in New York City.

“I’m reminded of ka wai hālau o Wailua (the expansive waters of Wailua, Kauaʻi), Kanaka Maoli knowledge and artistry is wide-ranging and interdisciplinary, we have much to offer,” Baker said. “The national recognition that the Hawaiian Theatre Program has received is more than acknowledgment of our hana noʻeau (artistic practices), it also recognizes our moʻolelo (stories), our ʻōlelo (language), our ʻāina (land), and our kūpuna (elders). That is our wai hālau, these waters offer a holistic appreciation and understanding of who we are and where we come from. This is ea (life).”

“The decision of the John F. Kennedy Center for the Performing Arts in Washington, D.C. to award the Medallion of Excellence to professor Tammy Hailiʻōpua Baker, is a major acknowledgment of her tireless work as a teacher, mentor, scholar, playwright, director, community member, and colleague,” said Markus Wessendorf, UH Mānoa Theatre and Dance chair. “Our MFA in Hawaiian Theatre was only established in 2014…however, in just a few years Dr. Baker managed to turn this Indigenous theatre program into a core component of our department and to lead it to such a level of excellence that it is now recognized at the national level.”

You could say theatre is a way of life for Baker and you would be right. Her kāne (husband), Kaliko Baker, who is a kumu ʻōlelo Hawaiʻi at UH Mānoa Kawaihuelani Center for Hawaiian Language, is also an accomplished scholar and storyteller. The power couple co-founded Ka Hālau Hanakeaka, a Hawaiian medium theatre troupe whose productions have toured internationally and throughout the Hawaiian archipelago.

That passion for the arts naturally caught on within their Koʻolaupoko hale (home) in Windward Oʻahu. Their keiki, Kaipulaumakaniolono (24) and Kaneikoliakawahineikaʻiukapuomua (19) both earned Kennedy Center awards at the same virtual ceremony on May 21. Kaipu’s production of He Leo Aloha earned eight awards, outshining dozens of top-ranked productions from across the country. His sister who took on one of the play’s lead roles, netted an award for her individual performance.

And celebrations are certainly in abundance for the Bakers in 2022. Their award winning keiki both graduated from UH Mānoa this spring, Kaipulaumakaniolono (MFA, playwriting) and Kaneikoliakawahineikaʻiukapuomua (bachelor’s, Hawaiian language).