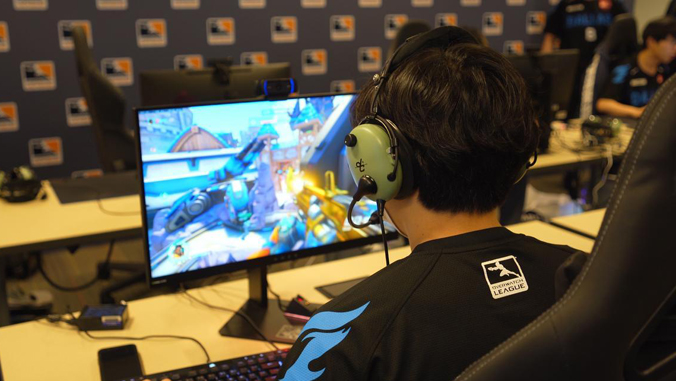 For the second year in a row, the University of Hawaiʻi at Mānoa will host a regular season Overwatch League global tournament, July 18–23. The tournament is expected to once again bring international exposure to UH’s flagship campus, which in 2021 became the first higher education institution in the country to host Overwatch League competitions, and provided UH students with valuable learning opportunities in the skyrocketing esports industry.

The Overwatch League is the world’s first city-based esports league, with 20 teams in North America, Europe and Asia. It features the game Overwatch, a team-based action game developed by Activision Blizzard, which, pending approval will be acquired by Microsoft in January for nearly $69 billion. During the pandemic, the league chose Hawaiʻi as a host location because teams from different regions of the globe were rarely able to play head-to-head matches due to the online latency difference. Hosting matches in the state was an effort to bridge the gap to bring safe and online interregional play from its best teams.

While the professional players compete, students from UH Mānoa’s esports teams work directly with the Overwatch League to learn about the operations of these world-class events. Overwatch is just one of many games propelling the global esports market. A new report projects global esports revenue will reach $1.38 billion in 2022, up from $1.08 billion in 2021. The global esports audience will also grow nearly 9% in 2022 to reach 532 million people.

“It’s validation that a lot of the work that we did last year really impressed the league—our student interns, the facilities, the staff at UH, ITS (Information Technology Services) being so accommodating to the league itself and also being able to use the iLab,” said Nyle Sky Kauweloa, a spring 2022 communication and information sciences PhD graduate and head of the UH Mānoa Esports Task Force in the College of Social Sciences.

The upcoming Midseason Madness tournament will feature eight teams from its West region playing from UH Mānoa, while teams from the East region in Asia will connect virtually and play head-to-head in real-time. They can be viewed live and on demand from the Overwatch League YouTube channel. The total purse for this tournament is $1 million.

Eleven UH Mānoa esports team members and one student from UH West Oʻahu will earn college credits serving as interns during the Overwatch League matches. They will participate in setting up the computers and systems for the matches. The Overwatch League has a special method of setting up the systems and conducting “integrity checks” so that players are not able to cheat while playing the game. Then, when the teams arrive for their matches, the students will essentially serve as liaisons, directing them where they will be playing and assisting them with anything they may need. UH and the Overwatch League are also planning special sessions before and/or after the matches where students can interact and learn directly from Overwatch League staff.

“I’m really looking forward to watching how events like these come together—I’m really into event planning, I’m really into esports event planning,” said Alie Wolpo, a UH Mānoa esports member and junior Academy for Creative Media major. “I’m really interested in getting to speak with some of the managers of this event and getting to pick their brains about like ‘hey, how did you think to do this?’ and ‘how did you get to this point?’ …I just want to learn everything about the ins and outs of this event.”