A new report examines the total impact that spending by medical schools and teaching hospitals has on Hawaiʻi’s economy, including jobs, labor income and overall economic value added. The AAMC (Association of American Medical Colleges) data shows that spending by the University of Hawaiʻi at Mānoa John A. Burns School of Medicine (JABSOM), its residency programs and affiliated faculty physician practice plans with support from its affiliated teaching hospitals supports 3,485 jobs and contributes $260 million to the Hawaiʻi economy. Associated spending by employees represents 0.26% of Hawaiʻi’s gross domestic product (GDP)—or $181 per Hawaiʻi resident. 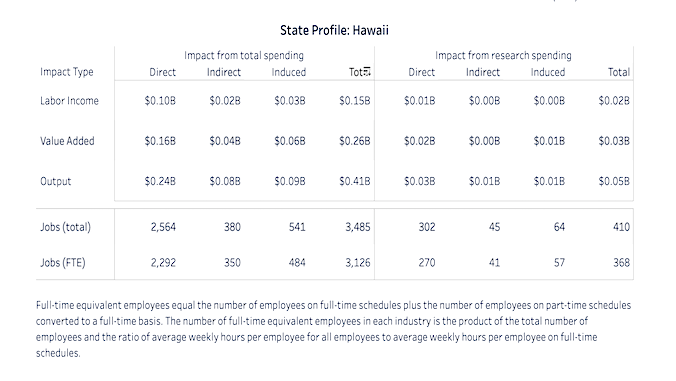 “The many contributions by JABSOM employees and affiliates to the health of Hawaiʻi throughout the pandemic are well recognized by Hawaiʻi residents. The ongoing economic contributions of our medical school, residency programs and affiliated physician faculty members to Hawaiʻi may be less recognized,” added JABSOM Dean Jerris Hedges.

According to the report, U.S.-based AAMC member medical schools and teaching hospitals generated approximately 3.2% of the nation’s GDP and supported more than 7.1 million jobs nationwide.

Research activities at medical schools and teaching hospitals resulted in $31 billion added to local economies and 348,000 jobs that generated $21 billion in salaries, wages and benefits. In addition, every dollar granted to AAMC members for research contributes $1.60 to the U.S. economy.

In 2019, the studied institutions added $728 billion in value to the nation’s economy, including direct economic impact and substantial secondary economic effects on the communities where they operate and beyond. Secondary impacts include activities such as institutional purchases of equipment, services, or supplies and employee purchases at local businesses.

The more than 7.1 million jobs supported by the institutions studied corresponds to 4.4% of the U.S. workforce and are spread out across multiple industries. Wages, salaries and benefits earned by workers in those jobs total $488 billion, or an average of $68,578 per job.

The study, conducted by RTI International on behalf of the AAMC, examined the economic impact of AAMC member medical schools and teaching hospitals in 47 states, the District of Columbia and Puerto Rico in 2019. Due to the timing of the data collected, this report does not factor impacts resulting from the COVID-19 pandemic.

“This report illustrates that medical schools and teaching hospitals are a critical component of healthy communities and thriving economies, and their role is unparalleled in educating future doctors, scientists, and health care professionals and improving the health of patients and communities,” said David J. Skorton, AAMC president and CEO. “These new data underscore the important role these institutions play in driving our economy at the local, state, and national levels—providing jobs, paying wages, and supporting business and community development opportunities and collaborations.”

View the full report, including national and state-specific data.