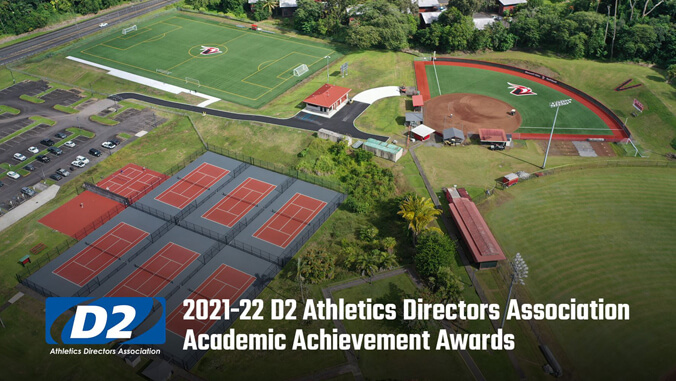 The award recognizes Division II student-athletes who have achieved a cumulative GPA of 3.5 or higher (on a 4.0 scale), completed at least two years of college-level work and have been an active member of an intercollegiate team during the last academic year.

“Our student-athletes continue to make us proud with their success in the classroom,” said UH Hilo Director of Athletics Pat Guillen. “The demands that they face in regards to travel while representing UH Hilo, the state of Hawaiʻi and our Big Island community is greater than any program in the country. Despite these demands they continue to excel in their academics and on the field. Well done!”

“Congratulations to all of the student-athlete recipients of the distinguished D2 ADA Academic Achievement Award,” said Kim Pate, vice president for athletics at Lenoir-Rhyne University and current D2 ADA president. “It’s been so impressive to see the number of student-athletes recognized for their stellar performance in the classroom grow to record numbers year to year since the inception of this award.”

The Vulcans ranked 6 out of 10 schools in the PacWest Conference. As a whole, the PacWest finished sixth among the other Division II conferences.