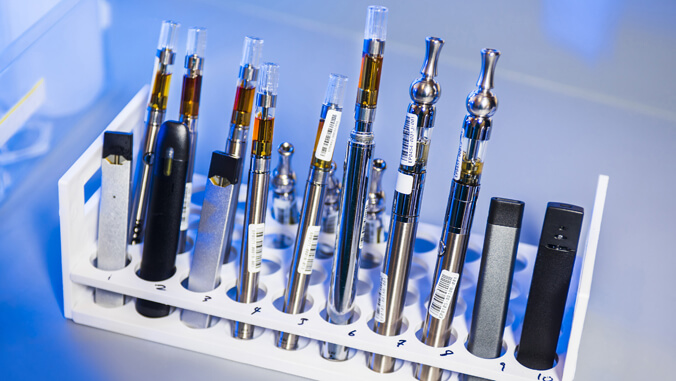 September 1, 2022 update: This paper has been selected for “American Physiological Society (APS) Select,” a collection from APS that showcases some of the best recently published articles in physiological research. This paper will be free to access for two months.

Menthol in e-cigarettes may be harmful to respiratory health, according to new research by a team of University of Hawaiʻi at Mānoa experts. The findings come as e-cigarette use is on the rise among Hawaiʻi’s youth.

Yi Zuo, UH Mānoa professor of mechanical engineering and adjunct professor of pediatrics, has invented a groundbreaking method that allows the study of the health impact of e-cigarette aerosols. This breakthrough research was published in June 2022 in the American Journal of Physiology—Lung Cellular and Molecular Physiology, “Menthol in Electronic Cigarettes Causes Biophysical Inhibition of Pulmonary Surfactant.”

Zuo’s research found that flavorings used in e-cigarettes, especially menthol, impaired a lipid-protein film at the air-water surface of the lung. This film is called the lung surfactant. It plays a central role in maintaining the normal respiratory mechanics of the lung. Therefore, Zuo’s research indicated that menthol in e-cigarette aerosols may cause an adverse impact on the respiratory health of the user.

“E-cigarettes were initially advertised as a healthier and safer alternative to conventional tobacco smoking when they first appeared in the mid-2000s,” Zuo said. “However, increasing research evidence, especially long-term (more than 10 years) toxicological data that emerged only in recent years, has suggested that e-cigarettes are not as safe as originally promised.”

E-cigarette use is on the rise among Hawaiʻi’s youth, according to a Youth Behavior Risk Survey by the UH Mānoa College of Education. Survey respondents who reported they used an e-cigarette or vaping product at least one day during the previous 30 days before taking the survey increased from 25.1% to 30.6% from 2015 to 2019. Respondents who used vapor products for more than 20 days in the past 30 days before taking the survey increased from 3.6% in 2015 to 10.4% in 2019.

Flavor is a main attraction to e-cigarette users, especially youth. As of 2018, there were more than 15,000 different e-cigarette flavor blends available on the market. Although most flavorings used in e-cigarettes are food-grade additives and scents, their safety and health impact on the respiratory system, at levels inhaled by e-cigarette users, have been largely unknown, until now.

Menthol is a substance found in peppermint, spearmint and other mint plants. It gives a cooling and soothing sensation, and is used to relieve minor pain and irritation. Menthol is added to products as a flavoring including cough drops, beverages, gum and candy. However, none of these products are smoked or inhaled when used. E-cigarette companies, contrastingly, add menthol to their products to make them more appealing and seemingly less harmful when used.

Zuo hopes this research finding may contribute to a better understanding of the health impact of e-cigarettes, especially on youth, and a better regulation of e-cigarette products. This research was a collaborative effort between Zuo’s lab and Professors Ellinor Haglund and Rui Sun in the UH Mānoa Department of Chemistry. This research was supported by a National Science Foundation award and the George F. Straub Trust and Robert C. Perry Fund of the Hawaiʻi Community Foundation.