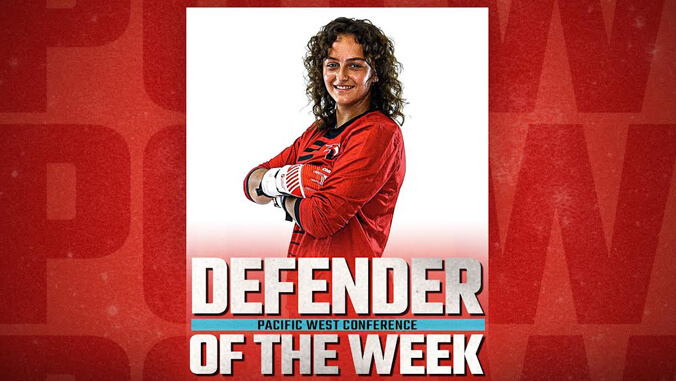 University of Hawaiʻi at Hilo women’s soccer freshman goalkeeper Lolo Retsky was named Pacific West Conference Defender of the Week for September 12–18. This is her second consecutive week earning the title.

Retsky totaled seven saves and allowed zero goals in posting two shutouts last week with a 3-0 win over Regis on September 12 and a scoreless tie with Hawaiʻi Pacific on September 17.

With most PacWest teams at least five games deep into the 2022 season, Retsky ranks among the top in the conference with a .400 goals-against average, two goals allowed, three total shutouts, .600 shutouts per game and a .867 save percentage.

With help from the Vulcans back-line defense composed of Jodi Lillie, Maisie Paulson, Juliet Hufford, Alia Bournay and Kierstyn Yamamoto, Retsky has also compiled the third lowest saves total at 13 for a conference-low of 2.6 saves per game.